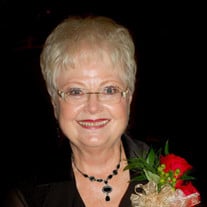 Diane Dolores Flahive, age 76 of Albia passed away on Sunday, December 6, 2020, surrounded by her loved ones at her home, under the care of EveryStep Hospice and her family. Diane was born on December 29, 1943 in Ottumwa, IA to Kenneth and Bernice (Casebolt) Bettis. She was raised on the Hiteman road in a tight-knit family where her grandparents and great-grandpa lived just down the hill and her aunt, uncle and cousins were next door and just a few miles away on highway 5. Diane spent many hours of adventures at grandpa and grandma’s farm as they played in the creek and the large barn, milking cows and helping out with gathering eggs and in the garden. At age four, Diane began her education at Spencer School with her cousin Larry. She attended this country school through the 8th grade where she developed a love of reading and creating artwork. She loved to draw and created many art pieces using mostly chalk. Diane was active in 4H as a member of the Troy Good Homemakers. She was named a ‘Better Groomed Girl’, was a club officer, county convention delegate and performed a team demonstration at the Iowa State Fair. She passed the tradition of outstanding home economics projects down to future generations. At Albia High School, she participated in choir and art club and developed many friendships that would last a lifetime. She was a proud 1961 graduate. Summer of ‘61 found her in Des Moines living in a house with high school friends where she worked at Bankers Life. In the fall she attended Northeast Missouri State Teachers College for a year following graduation. Diane married her high school sweetheart, Jimmy Flahive on December 8, 1962 at St. Peter’s Church in Lovilia. They shared almost 58 years of marriage prior to his passing on November 27, 2020. Diane worked at Moloney Door Company as a key-punch operator and at Monroe County Extension Office until the birth of her second child when she became a stay at home mom for the first time. Raising her family, she became a farmer’s wife when Jimmy followed his dream of becoming a farmer. She had huge gardens every summer and would can and freeze the fresh produce to eat over the winter. She was an excellent cook and prepared many meals of tenderloins and maid rites for hay help in the summer. Family favorites included fried chicken, round steak, cinnamon rolls, chocolate dessert, cream puffs and pepper steak with rice. Christmas time would find Diane making candies and baking cookies to place in boxes to be delivered to neighbors and friends. Diane was very creative and was a talented seamstress. She spent hours on needlework, sewing, craft projects, and later knitting. She enjoyed reading and loved music throughout her life. Diane worked at Sears Catalog store in Albia and as a teacher’s aide for the Albia Community School district up until the birth of twin daughters in 1978. She became a stay at home mom once again. Later she worked at Murphy’s Restaurant, Delongs mail order and Winger Contracting and completed her working career as Lancome consultant at Herberger’s in Ottumwa. She had so many good times everywhere she worked, made so many friends and truly enjoyed time spent with them on and off the job. Diane went back to school and received her associates degree from Indian Hills Community College in the 1990s. Diane loved shopping and could always find a bargain. She especially loved antique and thrift shops, browsing for hours when given the opportunity. She took pride in her yard and always had beautiful flowers each summer. The importance of family came from her large extended families on both sides. Diane attended countless family reunions and even hosted many for the Flahives over the years. She treasured every relationship she had, whether it be family or friend. She had a heart of gold and a beautiful smile. She was so very proud of her children and grandchildren and wanted nothing more than for every one of them to be happy. Diane is survived by 5 children, Kendra Sinclair, Jeff (LinAnn) Flahive, Lisa (Marty) Hermsen, Sarah (Adam) Scieszinski, and Susan Leshen; 18 grandchildren, Abbey Sinclair, Angie Wells, Emily Flahive, Jessica Flahive, Daniel (Sydney) Flahive, Pason (Brooke) Hermsen, Landon Hermsen, Dawson (Kenley Pettit) Hermsen, Chase (Sara) Farrell, Carson Farrell, Cash Hall, Wil Scieszinski, Tristian Hall, Kendra Hall, Gannon Steffen, Jessica Tokle, Jack Leshen, and Josie Rutherford; 4 great grandchildren, Elizabeth Diane, Olivia Rose and Priscilla Ann Farrell, and Everly Grace Hermsen; and 3 sisters, Elaine (Del) Griffin of LaGrange, IL, Susan (Ed) Murphy and Janet (Ronnie) Griffin of Albia. Diane is also survived by many nieces, nephews, cousins and good friends. She is preceded in death by her husband, Jimmy; her parents, Kenneth and Bernice Bettis; a sister Kendra Elaine in infancy; 3 sons-in-law, Chris Hall, Kirk Leshen, and Bill Sinclair and a grandson-in-law Chad Wells. Visitation will be held from 2:00 p.m. - 8:00 p.m. on Tuesday, December 8, 2020 at Tharp Funeral Home in Albia with Diane’s family present to greet family and friends. A Christian Wake service will be held at 6:30 p.m. A Mass of Christian Burial will be held at 10:30 a.m., Wednesday, December 9, 2020 at St. Mary’s Catholic Church in Albia, with Father Mark Yates C.PP.S. officiating. Burial will follow services at St. Mary’s Cemetery in Albia. Due to the most recent proclamation and enhanced public health measures for the state of Iowa, masks will be mandatory for those in attendance over the age of 2 for both visitation and the funeral service. In lieu of flowers, memorials may be made to Life 107.1 Operation Strong Tower, St. Mary’s Cemetery, or EveryStep Hospice.

Diane Dolores Flahive, age 76 of Albia passed away on Sunday, December 6, 2020, surrounded by her loved ones at her home, under the care of EveryStep Hospice and her family. Diane was born on December 29, 1943 in Ottumwa, IA to Kenneth... View Obituary & Service Information

The family of Diane Dolores Flahive created this Life Tributes page to make it easy to share your memories.

Diane Dolores Flahive, age 76 of Albia passed away on Sunday,...

Send flowers to the Flahive family.