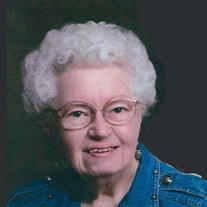 Delta Marie Smith, age 94, of Albia, passed away Sunday, April 8, 2018, at the Monroe Care Center in Albia. Delta was born on July 6, 1923, in Monroe County, Iowa to Walter and Laura (Rogers) Whitlock. She grew up and attended school in Albia. On August 26, 1942, she married Dwight Oneal Smith in Albia and to this union, 3 children were born, Charles, Donna, and Larry. Delta and Dwight shared 75 years of marriage prior to her passing. Delta was a homemaker until her children were raised and was a Cub Scout Den Mother. She then worked as the public health nurse for several years prior to owning and operating Half Circle Antiques store on the square in Albia. Delta was a member of the First Christian Church in Albia. She and Dwight enjoyed square dancing, being outdoors, and trailer camping. Delta was a talented seamstress and enjoyed sewing and quilting. She made a quilt for each one of her grandchildren. Her real joy in life was spending time with her family and friends. Delta is survived by her husband, Dwight Smith of Albia; a daughter, Donna Smith of Amarillo, TX; a son, Larry D. (Sandy) Smith of Quincy, IL; 4 grandchildren, Janis (Jim) Johnson, Jeff (Dawn) Smith, Julia Smith-Marzullo Reneau, and Amber Smith; 7 great grandchildren, Justin, Jamie, Jacob, Fletcher, Mitchell, Nick, and Noel; a sister, Ruth Sharp of Des Moines, IA; and a daughter-in-law, Kay Smith of Anamosa, IA. She is also survived by many nieces, nephews, cousins, and good friends. She is preceded in death by a son, Charles Leon Smith; her parents, Walter and Laura; a brother, Glen Whitlock; and 2 sisters, Roberta Adams and Illa Mae Gould. Visitation will be held from 10:00 a.m. until the time of services on Saturday, April 21, 2018, at the First Christian Church in Albia with Delta’s family present to greet family and friends. A memorial service will be held at 11:00 a.m., Saturday, April 21, 2018, at the First Christian Church in Albia with Pastor Lynda Carlson officiating. Burial will follow services at Oak View Cemetery in Albia, Iowa. A memorial has been established to the Leisure Lounge in Albia.

Delta Marie Smith, age 94, of Albia, passed away Sunday, April 8, 2018, at the Monroe Care Center in Albia. Delta was born on July 6, 1923, in Monroe County, Iowa to Walter and Laura (Rogers) Whitlock. She grew up and attended school... View Obituary & Service Information

The family of Delta Marie Smith created this Life Tributes page to make it easy to share your memories.