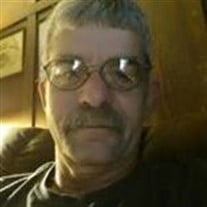 David Dewey Smead, age 61 of Albia, passed away Tuesday November 29, 2016, at Mercy Medical Center in Des Moines. Dave was born November 24, 1955, to Johnnie Mansfield and Betty Elaine (Myers) Smead in Iowa City. He graduated from Albia High School in the class of 1974. In 1990 he married Debbie Kirk in Albia. They shared 24 years of marriage before her passing on July 11, 2014. Dave worked at Monroe Plastics before taking a job with Maytag where he worked for 34 years until retiring in 2011. He was a member of the Fraternal Order of Eagles in Albia. Dave enjoyed being outdoors, fishing, hunting, watching trains with his brother John, and taking his dog Annie to the Albia Reservoir to let her run. His real joy in life was spending time with his friends and family, especially his grandchildren. Dave is survived by his children, Jenifer (Tommy) Gillespie of Knoxville, Michael (Lindsay) Smead of Albia and Gina (Shawn) Adolphi of Eddyville; 5 grandchildren, Delanie, Kaden, Colton, Cooper, and Kirkland; Dave is also survived by a brother John (Carol) Smead of Albia; 2 sisters, Peggy Smead of Avery and Betty (Benji) Thompson of Avery; and many nieces and nephews. He was preceded in death by his wife Debbie; his parents, Johnnie and Betty; a brother, George "Ned" Smead and a grandson, Kurtis Champoux. A memorial service will be held at 3:00 p.m., Sunday, December 4, 2016, at Tharp Funeral Home in Albia; with Pastor John Van Weelden officiating. A private family burial will be held at a later date. Visitation will be 2 p.m-8 p.m., Saturday, December 3, 2016, at Tharp Funeral Home in Albia, with Dave’s family present from 5-8 p.m.

The family of David D. Smead created this Life Tributes page to make it easy to share your memories.

Send flowers to the Smead family.