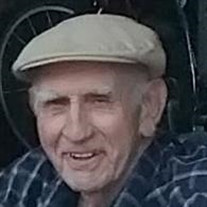 David LeRoy Reed, age 84, of Albia, passed away on Thursday, February 14, 2019, at Oakwood Specialty Care in Albia. Dave was born on December 31, 1934, to Tobe and Signe Marie (Carlson) Reed, on the family farm in Albia. He grew up and attended school in Albia, graduating from the Albia High School with the Class of 1952. On January 8, 1956, he married Carrie Van Loon at Pleasant Corners Church in Eddyville, IA. To this union, 3 children were born, Dan, Jeff, and Deanna. Dave and Carrie later divorced. He married Sheri Lewis and they later divorced also. Dave worked construction with his brother Bob at Reed Construction. He also hauled livestock for many farmers in the area before eventually owning and operating Eddyville Sale Barn. Lastly, Dave bought and sold cattle before fully retiring. He enjoyed going to cattle auctions and playing cards. He had coffee and doughnuts almost daily with his brother, Ray, and loved to socialize and visit with others. He delighted in attending his grandchildren’s baseball games. Dave’s true joy in life was spending time with his family and friends, especially his grandchildren and great-grandchildren. Dave is survived by his children, Dan (Michelle) Reed of Davenport, and Jeff Reed and Deanna (Sam) Beaird, both of Albia; 3 brothers, Ray (Pat) Reed, Terry (Carol) Reed, and Randy (Penny) Reed; 2 sisters-in-law, Sharon Reed and Jo’an Reed; 8 grandchildren, Codi, Skylar, Brittany, Zack, David, Whitney, Lexy, and Mckenzie; and 11 great-grandchildren. Dave is also survived by many nieces, nephews, cousins, and good friends. He is preceded in death by his parents, Tobe and Signe Reed; his stepmother, Elsie Reed; 2 brothers, Robert Reed and Ronald Reed; a sister, Nellie Osborn; and a brother-in-law, Raymond Osborn. Visitation will be held from 2:00 p.m.-8:00 p.m. on Sunday, February 17, 2019, at the Tharp Funeral Home in Albia with Dave’s family present from 5:00 p.m.-8:00 p.m. to greet family and friends. Funeral services will be held at 10:30 a.m. on Monday, February 18, 2019, at the Tharp Funeral Home in Albia with Pastor Mark Brandt officiating. Burial will follow services at Highland Cemetery in Eddyville, Iowa. An open memorial has been established to the family and will be determined at a later date.

David LeRoy Reed, age 84, of Albia, passed away on Thursday, February 14, 2019, at Oakwood Specialty Care in Albia. Dave was born on December 31, 1934, to Tobe and Signe Marie (Carlson) Reed, on the family farm in Albia. He grew up and... View Obituary & Service Information

The family of David LeRoy Reed created this Life Tributes page to make it easy to share your memories.