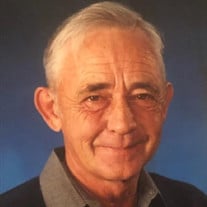 David “Rooster” Lee McReynolds, age 75, of Albia, passed away on Monday, August 9, 2021, at his home in Albia. David was born on December 13, 1945, to Walter and Mary (Musgrave) McReynolds at the hospital in Pittsburg, Kansas. He started school in Bronaugh, MO, moving to Walker, MO and Ridgeway, MO before graduating from Gilman City High School in Missouri with the Class of 1963. During his school years, he was active in FFA and 4-H. David married Ruth Reynolds and to this union, 5 children were born, Anita, Dan, Donnie, Doug, and Susan. David and Ruth later divorced. On February 14, 1991, he married Betty McReynolds at the Trinity United Methodist Church in Albia. Betty preceded him in death on September 15, 2003. He has spent the last several years with his significant other, Sondra Scott. Upon graduation, David worked at Iltis Lumber Company in Des Moines and farmed in Waukee. He later moved his family and purchased a farm in Lucas County. While farming, he was also a truck driver, hauling grain for other farmers, driving for Iowa Aluminum, Hy-Vee Foods, and later hauling fertilizer for Nutrien Ag Solutions. David enjoyed being outdoors and going for rides, especially to the river to watch the barges and boats going through the locks. He had draft horses and a wagon which he took to parades and used for weddings. Upon his retirement, David loved to meet the guys for coffee at the Highway Restaurant, which he did twice a day. He loved to visit with others and never knew a stranger. He also enjoyed spending time with his dogs, Mack and Molly. David is survived by his significant other, Sondra Scott; 5 children, Anita (Kevin) Duckworth, Dan (Kim) McReynolds, Donnie McReynolds, Doug McReynolds, and Susan McReynolds; 3 stepchildren, Sarah (Jason) Ochoa, Rod Perry, and Scott (Donnalee) Perry; 16 grandchildren, 7 great grandchildren; and 2 sisters, Ann McReynolds and Sarah (Leland) Groves. David is also survived by several nieces, nephews, cousins, and good friends. He was preceded in death by his wife, Betty McReynolds and his parents, Walter and Mary McReynolds. Per his wishes, David’s body has been cremated and a visitation will be held at a later date. A memorial has been established to Lucas and Monroe County4-H and FFA Programs.

The family of David Lee McReynolds created this Life Tributes page to make it easy to share your memories.

Send flowers to the McReynolds family.