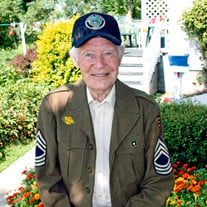 David Isaac Grimes, age 101, the oldest surviving World War II Veteran of Monroe County, went to be with the Lord on Tuesday, January 29, 2019, at North Mahaska Specialty Care in Oskaloosa, Iowa. David was born on November 6, 1917, on the family farm west of Albia to Harry and Mable (Barnhill) Grimes, the oldest of what would be 5 boys. His parents were direct descendants of some of Monroe County’s earliest settlers coming here by covered wagon in 1846. In fact, his mother was a direct descendant of the legendary Daniel Boone. David attended rural school in Monroe County and graduated from Albia High School in 1937. He then attended Iowa Success School for Business in Ottumwa while helping with the family farm which had moved in part to north of Lovilia. In the fall of 1941, America’s first peace time draft took place as World War II had already broken out in Europe and just prior to Pearl Harbor, David was drafted into the United States Army. He did basic training in Camp Crowder in Joplin, Missouri and later was detached to New Jersey for further training after Pearl Harbor. He became part of the 7th Army originally under General George Patton and later General Alfred Patch. He was a member of the 16th Tank Destroyers, which were fast moving light armored tanks used successfully against the heavier German tanks. Rising quickly through the ranks, David ultimately attained the rank of Master Sergeant and was part of the August 1944 invasion of southern France and the ultimate drive into southern Germany. David received numerous decorations, including two bronze stars. His group was also in on the liberation of Dachau, one of Nazi German’s worst concentration camps. After four years in the Army, David’s discharge brought him home to Monroe County where he farmed and worked at Peoples National Bank in Albia. On April 1951, he married Gladys Fleming of Albia, originally from Osceola, and lovingly raised her daughter, Carolyn and their son, Richard who was born in January of 1952. In that same year, he ran for Monroe County Auditor against the incumbent and won handily becoming Monroe County Auditor for over 32 years until January 1985 when he retired, winning 10 elections, 7 unopposed and 3 contested ones where he won by huge margins. David was an active member of the Howard Cessna Post of the American Legion for almost 75 years where he served as adjutant. He was also a member of the Veterans of Foreign Wars and was quartermaster. He served as Treasurer of Trinity United Methodist Church where he was a longtime member. He also served as Treasurer of the Monroe County Little League and the Albia Country Club and with Wylie Hartzell, helped save the club from insolvency. David was a lifetime Republican and was offered jobs repeatedly at the state level but preferred to stay in Albia. And though he was an active member of the G.O.P, he was known for his fair and impartial treatment of all regardless of party. David was honored in 2001 as one of the legends of Monroe County in a compendium of Albia notables in the Albia Newspaper. His career in public services netted him numerous awards and one of his proudest was a special personal letter saluting his service to his country in war and peace by President Ronald and Nancy Regan. David enjoyed life and loved spending time with his family and extended family. He and Gladys enjoyed nearly 68 years of marriage and were a wonderful team going almost everywhere together. He loved his children and grandchildren with all of his heart. He loved working in the yard and was happy that their Victorian home was twice selected as yard of the week. He was out watering and trimming bushes even into his 90’s. He and Gladys liked nothing better than sitting on their big front porch where everyone was welcomed and so many memories were made. He loved gardening as well and loved seeing his produce win awards at the county fair. He loved watching and later listening to St. Louis Cardinals baseball and Iowa Hawkeyes sports. It was always a thrill for him to hear his son Richard broadcast Albia High School sports. David’s love for sweets was famous and he loved to read, when his sight was good, particularly history and biographies and news magazines. He loved playing Yahtzee, Scrabble, and Wahoo board games and his laughter and demeanor made every game fun to play, win or lose. David was a humble, gentle and kind man who loved people and who people genuinely loved. He always made time for everyone. He had a strong but quiet faith and never complained. He was a man of great courage. He will always be treasured and remembered by everyone who knew him and all whose lives he touched. He was an amazing, wonderful man. David is survived by his wife, Gladys of Albia; his son, Richard Grimes of Albia; his grandsons, Matt (Stephanie) Sullivan of Naperville, Illinois and their children Sam and Zoe, Phillip (Jodi) Sullivan and their daughter Cora of Little Chute, Wisconsin, and Ted (Kristi) Sullivan and their children Ethan, Alex, Grace and Lucas of Belgrade, Montana. David is also survived by a host of nieces and nephews. He is preceded in death by his parents, Harry and Mable Grimes, his 4 younger brothers, James, John, Paul, and Emmett; his daughter, Carolyn Sullivan; and his daughter-in-law, Diane Grimes. Visitation will be held from 9:00 a.m. to 1:30 p.m., on Saturday, February 2, 2019, at the Trinity United Methodist Church in Albia, with David’s family present to greet family and friends. Funeral services will be held at 1:30 p.m., on Saturday, February 2, 2019, at the Trinity United Methodist Church in Albia with Pastor Neil Montz officiating. Burial with military rites provided by the American Legion of Albia, Melrose and Lovilia will follow services at Oak View Cemetery in Albia. Memorials have been established to the new Freedom Rock project at the Monroe County Courthouse, Trinity United Methodist Church, and Operation Christmas Child.

The family of David Isaac Grimes created this Life Tributes page to make it easy to share your memories.