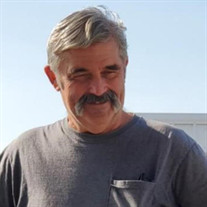 David “Dave” Dean Stewart, age 63, of Lovilia, Iowa, passed away unexpectedly on Saturday, March 19, 2022, in Mission, Texas. Dave was born on November 17, 1958, at the Oskaloosa Hospital to Paul and Elizabeth (Ewers) Stewart. He grew up attending school and graduated from the Albia High School with the Class of 1977. On December 3, 1977, he was united in marriage to Kim Conner at the Methodist Church in Lovilia and to this union, 3 sons were born, Jeff, Travis, and Nick. Dave and Kim shared 44 years of marriage prior to his passing. Dave was a lifelong cattle farmer and worked construction with Ben Pettyjohn in the Bussey and Lovilia area. He was very talented and did many stained glass windows. He later owned and operated the Lovilia Stop and Shop before hauling grain for local farmers. Dave enjoyed being outdoors, especially fishing with his grandchildren, and doing mechanic work. He was very meticulous about his lawn and took pride in his yard work. He loved to play pool. He and Kim loved to travel to Oklahoma and Texas and wintered in Texas for the past 15-16 years. Dave had a great sense of humor and loved to visit with others. Dave loved his family and cherished all of the time spent with them. Dave is survived by his wife, Kim; 3 sons, Jeff (Meghan) Stewart, Travis (Heather) Stewart, and Nick Stewart; 12 grandchildren, Kyleigh, Wyatt, Hailee, Eastyn, Kayla, Shelby, Morgan, Carson, Chase, Carter, Aria, and Beau; siblings, Karen Casper, Margaret VanLangen, Stephen (Ginny) Stewart, Claudia (Ron) Farrell, Debby (Bill) Conner, and Bess Powers; 2 sisters-in-law, Dotty Stewart and Cindy (Tom) Welsh; and a brother-in-law, Danny Conner. Dave is also survived by many nieces, nephews, cousins, and good friends. He was preceded in death by his parents, Paul and Elizabeth; a brother, Charlie Stewart; his parents-in-law, Don and Phyllis Conner; and brothers-in-law, Don Casper, Dale VanLangen, and Dick Powers. Per Dave’s wishes, his body has been cremated and a Celebration of Life service will be held at a later date. Cards of condolences/memorials can be sent to the family at 6233 132nd St., Lovilia, IA 50150.

The family of David "Dave" Dean Stewart created this Life Tributes page to make it easy to share your memories.