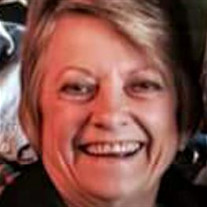 Darlene Marie Grimes, age 67, of Des Moines, passed away on October 13, 2016, at her home under the care of Mercy Hospice. Darlene was born on August 11, 1949 to Paul and Geraldine (Flahive) in Ottumwa, Iowa. She grew up and attended Twin Cedars High School, graduating with the class of 1967. After high school she attended IBM school in Kansas City and received training to operate a keypunch machine. Darlene worked at the Meredith Corporation before taking a job at Pioneer Seed. She worked at Pioneer for 20 years until she went to work for Prairie Meadows in Altoona and finally Wells Fargo until she retired in 2014. Darlene enjoyed fishing, league bowling, and playing softball for the Raiders and Bomberette’s in her fast pitch softball league. She was an avid Iowa Hawkeye and Chicago Cubs fan. Her real joy in life was spending time with her friends and family. She is survived by her mother, Geraldine Grimes of Albia; her life partner, Arlis Murra of Des Moines; two brothers, Jeffrey (Mary) Grimes of Lovilia and Mark (Sally) Grimes of Marysville, IA; a sister, Beverly (Scott) Selby of Colorado Springs, CO and several nieces, nephews and cousins. She is preceded in death by her father, Paul R. Grimes. A Mass of Christian Burial will be held at 10:30 a.m., Tuesday, October 18, 2016, at the St. Mary’s Catholic Church in Albia, with Fr. Michael E. Volkmer C.PP.S. officiating. Burial will follow services at St. Mary’s Cemetery in Albia. Visitation will be held from 1:00 p.m. to 7:00 p.m. Monday, October 17, 2016, at the Tharp Funeral Home in Albia with Darlene’s family present from 4:00 p.m.-7:00 p.m. to greet relatives and friends. A 6:00 p.m. rosary will be led by St. Mary’s Altar and Rosary Society and a wake service will be held at 6:30 p.m. Memorials may be made to the American Cancer Society or Mercy Hospice. Condolences may be left for the family at www.tharpfh.com.

Darlene Marie Grimes, age 67, of Des Moines, passed away on October 13, 2016, at her home under the care of Mercy Hospice. Darlene was born on August 11, 1949 to Paul and Geraldine (Flahive) in Ottumwa, Iowa. She grew up and attended Twin... View Obituary & Service Information

The family of Darlene Marie Grimes created this Life Tributes page to make it easy to share your memories.