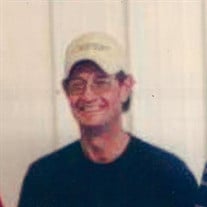 Dale Ellsworth Kline, age 60, of Knoxville, passed away on Tuesday, July 14, 2020, at his home in Knoxville, surrounded by his loved ones, under the care of EveryStep Hospice. Dale was born on March 16, 1960, to Gene Charles and Wilma (Smith) Kline in Albia, IA. He graduated from the Albia High School with the Class of 1979. He was united in marriage to Mabel “Tes” Smith on January 10, 1981, at the Methodist Church in Bussey, IA, and to this union 2 children were born, Kristopher Dale Kline from Knoxville, IA, and Andrew Alan Kline from Lovilia, IA. Dale had multiple jobs over the years but none compared to the one he loved most, training race horses with Barbara McClelland at Prairie Meadows Race Track. He loved to talk to everyone who would listen about the race horses. He had a few favorites, Hot to Go Go, Streakin’ Go Go, and definitely Stormin’ Jessie. Dale has always been a cowboy from his rodeo days of riding broncos and bulls to farming, hunting, fishing, and then his final passion, breaking and training race horses. Dale loved spending time with his family and friends and his extended family from the racetrack. Dale is survived by his wife of 39 years, Tes Kline; 2 sons, Kristopher Dale and Andrew Alan Kline; 2 brothers, Allen (Lee) Kline and Steven (Haley) Kline; his stepmother, Helen (Tom) Lahart; sisters-in-law, Annetta Kline, Karen (Jake) Keegel, and Connie (Pat) Flattery; and brothers-in-law, Mike Smith and Robert (Jolinda) Smith. Dale is also survived by many nieces and nephews. He was preceded in death by his parents, Gene Charles Kline and Wilma Stites; a brother, Dwayne Kline; a nephew, Luke Kline; his father and mother-in-law, Richard and Geraldine Smith; and a sister-in-law, Vicky Smith. Visitation will be held from 9:00 a.m. until 11:00 a.m., Friday, July 17, 2020 at the Monroe County Fairgrounds in the 4-H Exhibit Building in Albia. Following visitation, a memorial service will be held at 11:00 a.m., Friday, July 17, 2020, with Pastor Roger Henry officiating. An open memorial has been established to be determined at a later date.

Dale Ellsworth Kline, age 60, of Knoxville, passed away on Tuesday, July 14, 2020, at his home in Knoxville, surrounded by his loved ones, under the care of EveryStep Hospice. Dale was born on March 16, 1960, to Gene Charles and Wilma... View Obituary & Service Information

The family of Dale Ellsworth Kline created this Life Tributes page to make it easy to share your memories.

Dale Ellsworth Kline, age 60, of Knoxville, passed away on Tuesday,...

Send flowers to the Kline family.