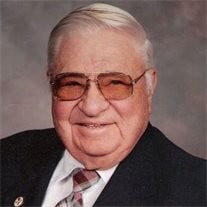 Dale A. Derby, age 83, of Albia, Iowa died Sunday, April 8, 2007 at the Monroe County Hospital in Albia. He was born June 25, 1923 in Exline, Iowa to Carl W. and Zella M. (Davis) Derby. He married Bernice Madeline Johnson on January 20, 1945 in Centerville, Iowa. She passed away March 17, 2004. He was a graduate of Moravia High School, class of 1942. Dale was a veteran of World War II having served in the U.S. Army. He had farmed and worked as a serviceman at the Maytag Store in Albia for several years and later delivered freight for Burlington Truck Lines. During Dale's retirement he worked several odd jobs repairing bicycles and clocks and worked visitations and funerals for Bernie Theulen and George Gilbert. Dale was a member of the First Christian Church in Albia, had served on the Monroe County Fair Board, was a past member and past Master of Astor Masonic Lodge No. 505 of Albia and currently a member of Ottumwa Lodge No. 16 AF & AM where he also served as a past Master. He is survived by one son, Gary and his wife Melodee of Osage Beach, Missouri; three grandchildren, Jodi (Tony) Wright, Jessica Derby and Trent Allen Derby and one great grandson, Trenton Michael Wright. Also surviving are two brothers, Carl Derby, Jr. of Pennsylvania and Robert Derby of West Des Moines, Iowa. His parents, wife, two brothers and one sister preceded Dale in death. Funeral services will be held at 10:30 A.M. Wednesday, April 11, 2007 at the Winfield Funeral Home in Albia with Rev. Lynda Carlson officiating. Burial will be held in Hillcrest Cemetery in Moravia. Visitation will open after 4:00 P.M. Tuesday, April 10 at the Winfield Funeral Home in Albia with the family present from 5-7 P.M. Tuesday evening. Masonic services will be held at 7:00 P.M. Tuesday at the funeral home conducted by the Ottumwa Lodge No. 16 AF & AM. An Open Memorial has been established.

The family of Dale A. Derby created this Life Tributes page to make it easy to share your memories.

Send flowers to the Derby family.