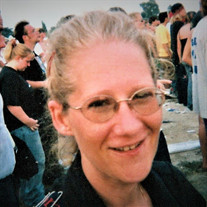 Cynthia “Cyndi” Jo Price, age 60, of Albia, passed away on Wednesday, January 16, 2019, at the Monroe County Hospital in Albia. Cyndi was born on November 30, 1958, in Aurora, IL, to Jerry and Shirley (Repp) Anderson. They moved to Albia, IA, when Cyndi was in middle school. She graduated from the Albia High School with the class of 1977 before attending Indian Hills Community College and later William Penn College in Oskaloosa where she majored in Accounting and minored in Economics. In 1978, she was united in marriage to Larry Price and to this union, 3 children were born, Jenn, Jody, and Jesse. Cyndi and Larry later divorced. Cyndi waitressed at different restaurants in the Albia area before taking a job with H & R Block working in Pella and Oskaloosa. She then went to work at Cargill Meat Solutions for 8 ½ years before going back to doing taxes on her own. Cyndi enjoyed being outdoors, gardening, going to the casino, playing Bingo, playing games on the computer, such as Candy Crush, and playing card games including Phase 10 and Pitch. Cyndi was an excellent cook, known for her sauerkraut and dumplings, snickerdoodles, and brownies. She was a talented seamstress and liked crocheting and embroidering. Cyndi was a very generous, loving, and social person, who never knew a stranger and was always willing to help anyone in need. She loved animals, especially Odin and Sassy, her beloved dogs. Her true joy in life was spending time with her family and friends and attending her children’s and grandchildren’s events. Cyndi is survived by her children, Jenn (Dennis) Conley of Albia, Jody (Jessica) Price of Moravia, and Jesse (Robin) Price of Albia; 9 grandchildren, Carson, Caleb, Ana, A.J., Dallas, Kaitlyn, Braydon, Grace, and Willow; and a brother, Mike Anderson. Cyndi is also survived by several cousins and good friends. She is preceded in death by her parents, Jerry and Shirley and her stepfather, Martin Cole. Visitation will be held from 9:00 a.m. until the time of service on Monday, January 21, 2019, at the Tharp Funeral Home in Albia, with Cyndi’s family present to greet family and friends. A memorial service will be held at 11:00 a.m. on Monday, January 21, 2019, at the Tharp Funeral Home in Albia, with Pastor Lynda Carlson officiating. A private family burial will be held at a later date. An open memorial has been established to the family.

The family of Cyndi Jo Price created this Life Tributes page to make it easy to share your memories.

Send flowers to the Price family.