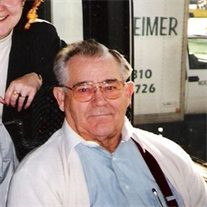 Clell Edward Van Dorin, age 83, of Albia, Iowa died Monday, January 15, 2007 at the residence in Albia. He was born April 15, 1923 in Fostor, Iowa to W.H. and Hazel Elizabeth (Anderson) Van Dorin. He married Augusta Louise Beadle on May 29, 1949 at the United Brethren Church in Long Branch, New Jersey. She passed away on February 4, 2004. He was a graduate of Moravia High School. He was a veteran of the Korean Conflict having served in the U.S Army. He worked at Chamberlain Manufacturing in Albia for several years, and farmed the family farm until retirement. Clell and his wife then moved to town. He was a member of Howard Cessna Post No. 136 American Legion of Albia, and he also volunteered at the Monroe County Historical Museum. Clell is survived by one son; James E. Van Dorin of New Orleans, Louisiana, one daughter, Mary L. Van Dorin of Des Moines, Iowa; two sisters, Cleo and (Delbert) Love of Albia, Iowa, and Bernice and (Kenny) Hinton of Moravia, Iowa. One brother-in-law, Clarence Baayen of Lovilia, Iowa, also survives Clell. He was preceded in death by her parents, wife, Augusta, one brother, Sylvan Van Dorin, and one sister, Marjorie Baayen. A Memorial Service will be held at 11:00 A.M. Saturday, January 20, 2007 at the Winfield Funeral Home in Albia with Rev. Kevin Leveck officiating. Burial will follow services at Oakview Cemetery in Albia with flag presentation by the Howard Cessna Post No. 136 American Legion of Albia. Visitation will be from 9:00 A.M. until service time at 11:00 A.M. Saturday, January 20, 2007 at the Winfield Funeral Home in Albia with the family present. Memorials have been established to the Monroe County Historical Museum.

The family of Clell Edward Van Dorin created this Life Tributes page to make it easy to share your memories.