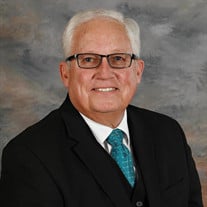 Chris Anderson, 69, died at his home in Albia, on Tuesday, April 27, 2021, following an eight-month illness. Christopher Joel Anderson, was born June 20, 1951, to Roy L. and Jean Geneva Anderson. The second of four sons, “The 4 C’s”. Chris was quick to learn how to please his dad and to be an ornery irritant to his mom. A 1970 graduate of Albia Community High School, he loved football, friends, cars, girls, and the backyard clubhouse on South Clinton Street, but not in any particular order. Chris met his wife Sandra on a snow-capped sledding hill on a Sunday afternoon in 1965. Sandra, quite smitten by the Mr. Anderson, but upon realizing she was only twelve and he only dated teenagers, this budding romance stayed dormant until Chris came to his senses and they were married, January 6, 1973, while Chris was home on military leave. Chris enlisted in the United States Air Force in 1970 and served during the Vietnam War as a Crew Chief on the C-130 Aircraft. A time he would do over in a heartbeat but seldom spoke about; his love and admiration for the American flag, one knew he never forgot. Upon his Honorable Discharge in 1974, Chris and Sandra returned home to Albia to start their family, surrounded by loving grandparents and family members. In September 1975, they welcomed first daughter, Heather Kristeen. In April 1980, another beautiful daughter, Ashlee Maree, joined their family, and Chris quickly became a great girl dad. Their family was complete, or so they thought, until two little neighborhood children, Spenser and Victoria Ahn, often joined them around their kitchen table. Husband and dad were titles that Chris proudly wore, but it wasn’t until the pitter-patter of tiny grandchildren feet that the title of Papa was his badge of honor. Ava Grace, Beckett Christopher, and Georgia Brynn, truly completed his family tree. Their Papa could fix anything. From broken toys in the driveway to hanging swings in the trees, the grandchildren realized very quickly their Papa had many qualities and talents and was always available. Chris retired as Postmaster from the Moravia Post Office in 2008. Although proud of his career choice, he was ready to begin retirement at age 56. Golfing, motorcycling, and vacationing were high on his to-do list. Although, his beloved, had a list of her own! Chris loved vehicles, but only Ford vehicles. He loved chrome, pinstriping, the new car smell, and never trusted an automatic car wash. Chris lived for his Kansas City and Minneapolis trips with the guys to pick up vehicles for Jack Scieszinski, and he would proudly wear his Albia Motor cap. Chris loved the color red in absolutely everything. His favorite red object was his Goldwing. He and Sandy made lifetime memories on the back of their bike with friends Bob and Trish Russell. Chris’s closet is full of shoes and coats, and there is a cabinet full of cologne. In our opinion he was the best dressed and best smelling man in Monroe County. He wore a dress suit better than most, which proved perfect for his position with the Tharp Funeral Home family. It was here that he realized his dislike of funeral flowers. From his first day of employment, you could hear him say “I don’t want any #$%@$% flowers. A total waste of good money.” Chris joined the Catholic church when Heather was an infant. A devoted convert, and his quiet faith sustained him to the end. Active and sometimes, okay, most times, vocal on the business side of the church, he served on the church finance board and cemetery board for many years. He was a member of the 3rd and 4th Degree of the Knights of Columbus. Although volunteered at many a fish-fry, he was not a fan of fish, but his smile was so welcoming at the serving line. Chris enjoyed his involvement in the community. He was a dedicated volunteer Albia Firefigher for 27 years and served on the city’s Planning & Zoning Board for several years. He was beyond proud of the Welcome Home Soldier Monument and has a flag displayed in his honor and his name engraved on the wall. Chris and Steve Griffin together enjoyed the Eastern Iowa Honor Flight 37 to Washington DC on September 17, 2019. An event that created memories and many conversations. New Years Day 2019, Sandy suggested that they winter somewhere warm. Chris challenged her to find an AIRBNB by midnight and he would go. At 7pm, a vacation rental was secured on the beautiful beach of Gulf Shores, Alabama. Winter 2019 and 2020 was truly a highlight for them. Although his illness postponed their 2021 trip, a strong desire to return to their happy place remained. It is with such great sadness that I write these words in memory of Chris, but I am so very happy that I traveled the majority of his life’s highway with him. A good, decent, and handsome man he was. Truly top shelf! Survivors include his wife of 48 years, Sandra; daughter, Heather, of Colorado; daughter, Ashlee and son-in-law, Bryon Stilley, and grandchildren, Ava, Beckett, and Georgia, of Colorado; and his Victoria, of Des Moines; brothers, Craig (Thomas) of Kansas City, Curt (Julie) of Melrose, Cevin (Monica) of Waukee, and brother-in-law, Jim (Karen) Hayworth of Albia. His quick-wit and loyalty was appreciated by his nieces and nephews, cousins, godchildren, and abundance of friends. Friends may visit after 1p.m. on Friday, April 30, 2021, at the Tharp Funeral Home. Chris’s family will be present throughout the afternoon and evening. A Rosary will be recited by the Knights of Columbus at 6:30 p.m., with a Christian Wake Service immediately following. Masks are strongly encouraged. A Mass of Christian Burial will be held at 11a.m. on Saturday, May 1, 2021, at St. Mary’s Catholic Church in Albia. Burial will follow at St. Mary’s Cemetery in Albia with full military rites. In respect to Chris’s wishes, his family is requesting no flowers, but if so inclined, please consider a donation to either memorial dear to his heart: The Albia Volunteer Fire Department or Welcome Home Soldier.

The family of Christopher Joel Anderson created this Life Tributes page to make it easy to share your memories.

Chris Anderson, 69, died at his home in Albia, on Tuesday, April...