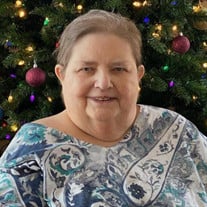 Christine Max Comstock, age 75, of Albia, passed away on Wednesday, March 25, 2020, under the care of EveryStep Hospice at Oakwood Specialty Care in Albia. Christine was born on December 7, 1944, to Max and Ina (Deavers) Combs in Ottumwa, IA. She grew up and attended school in Albia, graduating with the Class of 1966. Christine married Henry Black and to this union 2 children, Richard and Lisa, were born. Christine and Henry later divorced. She then married Cecil Comstock, whom she shared her marriage with until his passing. She has since shared many years with her loving partner, Fred Steinway. Christine was a nurse’s aide at the Albia Hospital for many years before becoming a homemaker. She was a member of the Fraternal Order of Eagles in Albia. She enjoyed reading, crocheting, and spending time with her family and friends, especially her grandchildren and great grandchildren. Christine is survived by 2 children, Richard Black of Albia and Lisa (Johnny Berry) Zook of Ottumwa; 2 grandchildren, Christopher (Dana) Black of Pella and Vada (Mark Straube) Penfield of Albia; 3 great grandchildren, Ashtyn Devooght, Gwen Black, and Sterling Black; and her life-long best friend, Susan Mickles. Christine is also survived by many nieces, nephews, cousins, and good friends. She was preceded in death by her parents, Max and Ina Combs; her husband, Cecil Comstock; a sister, Sondra Henry; and 2 brothers, Michael and Richard Combs. No Visitation is planned. A memorial service will be held at 10:30 a.m., Saturday, June 27, 2020, at the Tharp Funeral Home in Albia, with Pastor Burt Schwab officiating. A private family burial will be held at a later date. A memorial has been established to the American Legion Howard Cessna Post #136 of Albia or the Welcome Home Soldier Monument in Albia. Condolences may be left for the family at www.tharpfh.com.

Christine Max Comstock, age 75, of Albia, passed away on Wednesday, March 25, 2020, under the care of EveryStep Hospice at Oakwood Specialty Care in Albia. Christine was born on December 7, 1944, to Max and Ina (Deavers) Combs in Ottumwa,... View Obituary & Service Information

The family of Christine Max Comstock created this Life Tributes page to make it easy to share your memories.

Christine Max Comstock, age 75, of Albia, passed away on Wednesday,...

Send flowers to the Comstock family.