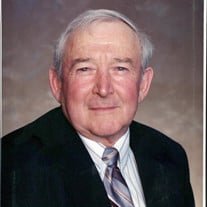 Charles “Jake” Eugene Jacobs, age 89, of Albia, IA, passed away on Wednesday, September 15, 2021, at Monroe County Hospital in Albia. Jake was born on July 8, 1932, at home on the family farm in Wapello County to Charles Wilson and Norvella Blanche (Apley) Jacobs. He grew up attending Jack Oak Country School and later Albia High School, graduating with the Class of 1950. On June 26, 1955, he was united in marriage to Betty Arlene Bates at Otterbine United Methodist Church in Albia and to this union, 3 children were born, Sheila, Mark, and John. Jake and Arlene shared 66 years of marriage prior to his passing. Jake worked at Morrell’s in Ottumwa, quit to farm with his parents before serving his country in the United States Army from October of 1952-October of 1954. Jake was stationed in Fort Bliss in southwestern Texas where he tested radar equipment. Upon returning home from the service, Jake went to work on the Mohr Ranch near Blakesburg and also worked for the Mohr’s around South New Haven. In 1959, he went to work for Henderson Implement in Albia as a mechanic where he worked for 22 years. Throughout the years, Jake and Arlene also managed their own farm. In his younger years, Jake was very active in 4-H and FFA and continued this into his adult life by serving as a 4-H leader for 18 years and being an active alumni member with the FFA. He was a member of the Trinity United Methodist Church in Albia, Monroe County Cattlemen’s Association, and the American Legion. Jake served as Treasurer and Member at Large for Farm Bureau as well as serving on the boards for Rathbun Regional Water, REC, the cemetery board, and Monroe County Extension Council. His dedication and hard work paid off with many awards, such as the Monroe County Farm Bureau Farmer of the Year Award, the Monroe County and Iowa 4-H Award, and was featured in the Albia Union Republican celebrating Monroe County’s oldest farmers. Jake enjoyed being outdoors, hunting and cutting wood. He and Arlene enjoyed square dancing and were members of the Lads and Lassies Square Dance Club. They also enjoyed Hee Haw Shows, where he and Arlene participated in skits and Arlene yodeled. He was very social and never knew a stranger. Above all else, Jake loved spending time with his family and friends, especially his grandchildren and great grandchildren. Jake is survived by his wife, Arlene; his children, Sheila Sample and Mark Jacobs of Albia and John (Selena) Jacobs of Ottumwa; his grandchildren, Guy Jr. (Tara) Sample and Amy (Travis) Kaster of Albia and Sam, Elijah and Gabe Jacobs of Ottumwa; his great grandchildren, Trey, Guy III, and Gus Sample and Olivia and Josiah Kaster; and a sister, Helen Cook of Oskaloosa. Jake is also survived by several nieces, nephews, cousins, and good friends. Jake is preceded in death by his parents, Charles and Norvella; a son-in-law, Guy Sample; and 2 brothers-in-law, Don Cook and Don Spurgin. Visitation will be held from 9:00 a.m.-11:00 a.m. on Saturday, September 18, 2021, at the Tharp Funeral Home in Albia with Jake’s family present to greet family and friends. Funeral services will be held at 11:00 a.m. on Saturday, September 18, 2021, at the Tharp Funeral Home in Albia with Pastor Roger Henry officiating. Burial with military honors provided by the American Legion of Albia, Lovilia, and Melrose will follow services at the Blakesburg Cemetery in Blakesburg, IA. In lieu of flowers, a memorial has been established to the Trinity United Methodist Church or the Monroe County Fairgrounds.

The family of Charles "Jake" Eugene Jacobs created this Life Tributes page to make it easy to share your memories.

Send flowers to the Jacobs family.