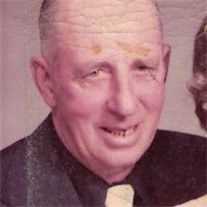 Charles (Chuck) Albert Gile, age 93, of Albia formerly of the Melrose area died Saturday, July 28, 2007, at Oakwood Nursing and Rehab Center in Albia, Iowa. Charles was born in May 1914 in Marshall County, Iowa, to Fred and Mae Hass Gile. He married Hattie Lorene Wood April 19, 1939, and they celebrated 68 years of marriage. Charles farmed in Marshall and Monroe counties in Iowa. He worked 37 years for Albia Sales Company, and sold seed corn for 17 years. After the sudden death of his father when Charles was only 15 years of age he cared for his mother and his younger brother and sisters. He was a past member of Monroe County Farm Bureau and a past 4-H Leader in Monroe County. His passion was farming and he enjoyed playing cards and square dancing as he called many dances in his younger years. He is survived by his wife, Lorene of Albia; son Richard (Carole) Gile of Oskaloosa, Iowa, daughter Carol (Terry) Reese of Des Moines, grandchildren Sherrie and David (Kim) Gile, and Laura and Rick Reese, 5 great grandchildren, 1 great-great granddaughter, his sisters Dorothy Coughlin, Betty Brown, Evelyn Ramsey, sister-in-law June Gile, and brother-in-law Glen Staebler, and many nieces, nephews, cousins, and friends. He was preceded in death by his parents, his brother Ray Gile, sisters Mildred Staebler and Maxine Logan, and three brothers-in-law. Funeral services will be held 11:00 a.m. Wednesday, August 1, 2007 at the Winfield Funeral Home in Albia with Rev. Kevin Leveck officiating. Burial will follow in the Mt. Calvary Cemetery in Melrose, Iowa. Visitation will open after 12:00 p.m. Tuesday, July 31, 2007 at the Winfield Funeral Home in Albia with the family present from 6-8 p.m. Tuesday evening. Casket bearers will be David, Alex and Steve Gile, Bob Buchwald, Rick Reese and Steve DeLaney. Memorials have been established to Hospice of Monroe County or to the American Cancer Society.

The family of Charles Albert Gile created this Life Tributes page to make it easy to share your memories.

Charles (Chuck) Albert Gile, age 93, of Albia formerly of the...

Send flowers to the Gile family.