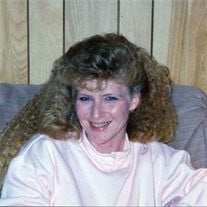 Charlene Louise Stoner, age 53, of Albia, passed away peacefully Tuesday, March 15, 2016 under the care of Care Initiatives Hospice at her home in Albia. Charlene was born August 6, 1962 in Spokane, Washington to Cleo and Vivian Sue (Herrington) Ward. She grew up and attended elementary school at White Swan, Washington and later got her G.E.D. She attended Phillips Junior College in Springfield, Missouri and graduated as a medical transcriptionist. Charlene has 2 children, Travis and Lauranda. Charlene worked at R&S Floral in Halltown, Missouri where she thoroughly enjoyed making floral arrangements. She was also a waitress throughout her life and She later worked at the Hy-Vee Deli and lastly worked in the kitchen at Oakwood Nursing and Rehabilitation Center in Albia. She enjoyed being outdoors, doing things such as gardening and going for rides to watch wildlife. She also enjoyed attending concerts and collecting sailboats, lighthouses, and crock jugs. Her real joy in life was spending time with family, friends, and her 2 dogs Molly and Pee Wee. Charlene is survived by her significant other, Dudley Chidester for 14 years, of Albia; 2 children, Travis (Rachel) Stoner of Springfield, Missouri, and Lauranda (Ryan) Way of Canmore, Alberta, Canada; her mother, Vivian Brisbois of Rader; a sister, Susan & Michael Jackson, of Lebanon, Missouri; 3 brothers, Ed Hert of Leavenworth, Kansas, Ray Brisbois and Paul Brisbois of Rader, Missouri; 5 grandchildren, Alissa, Travis II, Maddison, Cloe, and Kennedy; a step daughter, Heather (Raymond) Kiews, 4 sisters-in-law, Donna (Marvin) Weiler of Ankeny, Deb (Larry) Gates, of Ottumwa, Diane (Kevin) Thomas of Menlo and DeAnn (Jerry) Purvis of Monroe, and 2 brothers-in-law, Doug Chidester of Centerville, and Darin (Tami) Chidester of Attica. She is also survived by 3 good friends, Jo Runnells, Donna Schiflet, Christy Brownlee and many nieces, nephews, and her 2 dogs Molly and Pee Wee. She was preceded in death by her father, Cleo Ward; a sister, Judy Rogers; and 3 brothers, Clarence Hert, Melvin Kavanaugh, and Marvin Kavanaugh. Funeral services will be held at 1:00 p.m., Monday, March 21, 2016 at Tharp Funeral Home in Albia, with Pastor Lynda Carlson officiating. As was her wish, her body will be cremated after the service and a private family burial will take place at a later date at Oak View Cemetery in Albia. Visitation will be held prior to the service from 11:00 a.m.-1:00 p.m. Monday, March 21, 2016 at Tharp Funeral Home in Albia. Memorials may be made to Charlene's family.

Charlene Louise Stoner, age 53, of Albia, passed away peacefully Tuesday, March 15, 2016 under the care of Care Initiatives Hospice at her home in Albia. Charlene was born August 6, 1962 in Spokane, Washington to Cleo and Vivian Sue (Herrington)... View Obituary & Service Information

The family of Charlene Louise Stoner created this Life Tributes page to make it easy to share your memories.

Send flowers to the Stoner family.