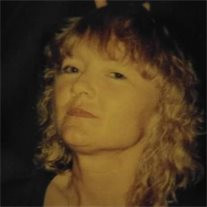 Cathy Jill Reed, age 58, of Bussey, passed away Monday, April 4, 2016 at the Mercy Medical Center in Des Moines. Cathy was born November 23, 1957 to Don and Sandra (Marshall) Zellmer at her parent's home in Pershing, Iowa. She grew up and attended school at Twin Cedars. She was united in marriage to Mark Reed on September 6, 1975 in Princeton, Missouri. To this union 3 children were born, Deann, Jill, and Kevin. Cathy was a homemaker and also helped babysit for many families in the area. She loved being outdoors, camping and going barefoot. She was a very fun loving, good natured person that would do anything for her grandchildren no matter how big or small. Cathy enjoyed riding motorcycles and watching the Iowa Hawkeyes basketball team. Her real joy in life was spending time with her family and friends, especially her grandchildren. She is survived by her husband, Mark; her parents, Don and Sandra; her children, Deann (Chris) McElroy, Jill Grimes, and Kevin "Ralph" (Amanda) Reed; 10 grandchildren, Tess, Harlie, Trinity, Reed, Owen, Titan, Wyatt, Chase, Layla, and Sydney; a sister, Donna; 2 brothers, Gary and Roger (Kim); a mother-in-law, Barbara Rogers, 2 brothers-in-law, Steve (Jo Ann) and Craig (Carol); a sister-in-law, Sue (Joe); and several nieces and nephews. Cathy was preceded in death by her brother, Bob; a father-in-law, Jack Reed; and an sister-in-law, Penny Reed. Funeral services will be held at 10:30 a.m., Saturday, April 9th, 2016 at Tharp Funeral in Albia, with Pastor Don Thurman officiating. Burial will follow services at the Greenlawn Cemetery in Bussey. Visitation will be held from 11:00 a.m.- 8:00 p.m., Friday, April 8th, 2016 at the Tharp Funeral Home in Albia with Cathy's family present from 4:00 p.m.-8:00 p.m. A memorial has been established to the family. Condolences may be left for the family at www.tharpfh.com.

Cathy Jill Reed, age 58, of Bussey, passed away Monday, April 4, 2016 at the Mercy Medical Center in Des Moines. Cathy was born November 23, 1957 to Don and Sandra (Marshall) Zellmer at her parent's home in Pershing, Iowa. She grew up and... View Obituary & Service Information

The family of Cathy Jill Reed created this Life Tributes page to make it easy to share your memories.