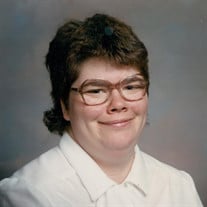 Catherine Ione Summers, age 53, of Albia, passed away on Thursday, August 9, 2018, at the Mercy Medical Center in Des Moines, Iowa surrounded by her loved ones. Cathy was born on September 27, 1964, to Clarence “Shag” and Mary Jane (Drury) Summers at the Monroe County Hospital in Albia, Iowa. Cathy attended school in Albia and graduated from Albia High School with the Class of 1983. Cathy worked at Ragtime Industries in her younger years doing various tasks. After working at Ragtime, Cathy attended Day Hab at Monroe County Professional Management where she socialized and participated in many different activities with her friends. Cathy was a member of the Fraternal Order of Eagles. She enjoyed playing card games, board games, and Bingo. Cathy was very social and enjoyed spending time in the community attending any activities offered, such as parades, going out to eat, swimming at the pool, or just going for walks around town. She also enjoyed watching older television sitcoms, especially The Brady Bunch and The Golden Girls. Cathy loved spending time with her family and friends and especially enjoyed teasing her nieces and nephews. Those left to carry on Cathy’s memories are her brothers, Thomas (Patsy) Summers and Philip (Julie) Summers; the love of her life, her boyfriend, Brad Brown; 5 aunts, Janet Summers, Lori Keiffer, Kathryn Judge, Gerry Drury and Mary Drury. She is also survived by many nieces, nephews, cousins and good friends. She is preceded in death by her parents, Shag and Mary Jane; and a brother, Greg Summers. Visitation will be held from 2:00 p.m. to 8:00 p.m. Sunday, August 12, 2018, at Tharp Funeral Home in Albia, with Cathy’s family present from 4:00 to 8:00 p.m. to greet family and friends. Funeral services will be held at 10:30 a.m., Monday, August 13, 2018, at the Tharp Funeral Home in Albia with Jason Summers officiating. Burial will follow services at St. Peter's Catholic Cemetery in Lovilia, Iowa. Memorials have been established to the family to be determined at a later date.

The family of Catherine Ione Summers created this Life Tributes page to make it easy to share your memories.

Catherine Ione Summers, age 53, of Albia, passed away on Thursday,...

Send flowers to the Summers family.