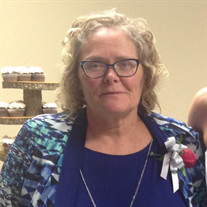 Dateline: Albia, Iowa Carol Genereux Carol Ann (McGee) Genereux, age 57, of Albia, passed away on Monday, February 26, 2018, at the Hospice House of Ottumwa, serving Davis and Wapello Counties, surrounded by her loved ones. Carol was born on September 8, 1960, at the St. Joseph Hospital in Centerville, IA, to James Edward and Patricia Claire (O’Hara) McGee. She grew up and attended school in Albia, graduating from the Albia High School with the Class of 1978. She later obtained her Associates of Arts Degree from Indian Hills Community College. She married Daniel Genereux in 1987, and to this union, a daughter, Katie, was born. Upon graduating from college, Carol worked for Indian Hills Community College. She then went to work as an Army civilian for the Department of Defense, first at the Rock Island Arsenal and later at the Detroit, MI Arsenal for the U.S. Army Tank Automotive and Armaments Command (TACOM), from which she retired in December of 2015. Upon retirement, she moved to Hawaii for 4 months. She loved to travel and purchased an RV to be able to do so. Carol enjoyed attending craft shows and reading books. She was an animal lover and loved to go to zoos. She enjoyed being outdoors, taking walks and exploring. She was a lifelong, avid Chicago Cubs fan and enjoyed watching and attending games. Her greatest joy in life was spending time with her family and friends, especially her daughter, nieces, and nephews. Carol is survived by a daughter, Katie Genereux of Takoma Park, MD; her mother, Patty McGee of Albia; siblings, Pat (Bette) McGee of Fort Wayne, IN, and Mike (Julie) McGee and Jean (Bob) Henderson, both of Albia; her nieces and nephews, Nicole, Aaron, David, Daniel, and Austin; and a special uncle, Dr. W.G. O’Hara. Carol is also survived by several cousins, great nieces and nephews, and good friends. She is preceded in death by her husband, Daniel Genereux; her father, James Edward McGee; brothers, Jim and Tim McGee; and her grandparents, Bill & Clara McGee and W.G. & Verna O’Hara. Visitation will be held from 4:00 p.m. ~ 8:00 p.m.; Thursday, March 1, 2018, at the Tharp Funeral Home in Albia, with Carol’s family present throughout to greet family and friends. A Mass of Christian Burial will be held at 10:30 a.m., Friday March 2, 2018, at St. Mary's Catholic Church in Albia, with Fr. Michael E. Volkmer C.PP.S. officiating. Burial will follow services at Mt. Calvary Cemetery in Melrose. In lieu of flowers, a memorial has been established to the Hospice House of Ottumwa, serving Davis and Wapello Counties. Condolences to the family may be left online at www.tharpfh.com.

The family of Carol Ann Genereux created this Life Tributes page to make it easy to share your memories.

Send flowers to the Genereux family.