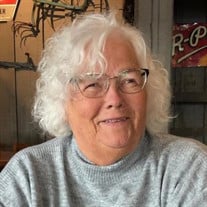 Carol Adelia Gardner, age 78, of Albia, passed away on Thursday, November 7, 2019, at Mercy Medical Center in Des Moines, IA. Carol was born on April 2, 1941, in Iowa City, IA, to James and Alice (Kent) Mullinix. She grew up and attended school in Albia. On December 29, 1958, she married Ray Gardner in Albia and to this union, 3 children, Tim, Maggie, and Annie were born. Carol was a homemaker, taking care of her family for 25 years. Later she worked at various jobs, including running a bed and breakfast in Centerville, IA, where she also did specialty gourmet catering and selling Bosch Magic Mill, before finally landing at Gardner Crop Insurance, working with her son, Tim. Carol was a member of the Master Gardener’s Club in Albia, Quilt Club, and a walking club. In earlier years, she was very involved in 4-H. She loved to cook and bake to share with others and used to grind her own wheat to make bread. She loved listening to music and enjoyed being outdoors and gardening. Carol was very social, enjoyed visiting with others and never knew a stranger. She was loved by all who knew her. Carol’s family was everything to her and above all, she enjoyed spending time with them, especially her grandchildren and great grandchildren. Carol is survived by her children, Tim (Jody) Gardner of Albia; Maggie Popson of Tampa, FL, and Annie Gardner of Albia; 5 grandchildren, Sarah (Kris) Popson, Katie (Chris) Adams, Emily (Travis) Patton, Kyle (Katie) Popson, and Elizabeth (Slater) Poe; 9 great grandchildren, Kole, Sophia, Bella, Cal, Ross, Emery, Thatcher, Nova, and Clay; 2 sisters, Louise Kosmach of DeWitt, IA, and Wanna Shaw of Loveland, CO; and 2 brothers, James (Rosalie) Mullinix of Albia, and Ralph (Priscilla) Mullinix of Loveland, CO. Carol is also survived by several nieces, nephews, cousins, and good friends. She was preceded in death by her parents, James and Alice Mullinix; a brother, Jean Mullinix; a sister, Laura Lee Mullinix; and 2 brothers-in-law, John Kosmach and Jack Shaw. Visitation will be held from 10:00 a.m.-8:00 p.m. on Monday, November 11, 2019, at the Tharp Funeral Home in Albia, with Carol’s family present from 4:00-8:00 p.m. to greet family and friends. Funeral services will be held at 10:30 a.m. on Tuesday, November 12, 2019, at the First Christian Church in Albia, with Pastor Lynda Carlson and Brad Gray co-officiating. Burial will follow services in Oak View Cemetery in Albia.

Carol Adelia Gardner, age 78, of Albia, passed away on Thursday, November 7, 2019, at Mercy Medical Center in Des Moines, IA. Carol was born on April 2, 1941, in Iowa City, IA, to James and Alice (Kent) Mullinix. She grew up and attended... View Obituary & Service Information

The family of Carol Adelia Gardner created this Life Tributes page to make it easy to share your memories.

Carol Adelia Gardner, age 78, of Albia, passed away on Thursday,...

Send flowers to the Gardner family.