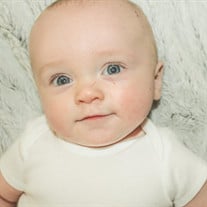 Cameron Allen Haluska, infant son of Michael and Sarah Haluska of Albia, passed away Friday, February 9, 2018, at Mercy Medical Center in Des Moines surrounded by his family. Cameron is survived by his parents, Michael and Sarah; his grandparents,... View Obituary & Service Information

The family of Cameron Allen Haluska created this Life Tributes page to make it easy to share your memories.

Send flowers to the Haluska family.