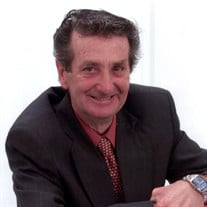 Burdette “Butch” Francis Mahon, age 77, of Albia, passed away on Friday, January 1, 2021, at his home in Albia, IA, surrounded by his family and under the care of EveryStep Hospice. Butch was born on September 5, 1943, to Francis William and Dorothy Marie (Dunbar) Mahon at Mercy Hospital in Des Moines, IA. Butch grew up attending school in Des Moines and graduated from Tech High School. He later attended St. Cloud State University in Minnesota where he studied Computer Science. In 1967, he was united in marriage to Susan Hook and to this union 2 children were born, Gerald and Tonya. Butch and Susan later divorced. On April 2, 1994, Butch married Linda Davis at the Little Brown Church in Nashua, IA. Butch served his country in the United States Army. He was stationed in Korea during the Vietnam era serving with the military police. Following his time in the service, he was an intracontinental electrical lineman installing high wires through the mountains and other dangerous areas, often hanging out of a helicopter to complete the job. An unfortunate injury cut his lineman career short and Butch later operated heavy equipment doing general construction as well as rebuilding roads. Butch was a member of the IBEW Union 55 of Des Moines. He enjoyed being outdoors, especially mushroom hunting. He was a jack of all trades. He was a skilled carpenter who loved to make furniture. He was a talented mechanic working on anything from tractors to cars. He was a good cook, known for his ham and beans and his pickles. Farming was his passion, including row crops and raising Hereford cattle. Butch was very generous and always willing to help his family and friends. He was a mentor to all and often said, “If a job is worth doing, it is worth doing right.” Above all else, Butch cherished the time spent with his family and friends, especially his grandchildren. Butch is survived by his wife, Linda Mahon; a son, Gerald Mahon; 4 stepchildren, Katie (Steve) Seifert, Greg (Ashly) Davis, Brad (Sarah) Davis, and Scott (Ashlee) Davis; 11 grandchildren, Tayla, Faye, Joselyn, Stella, Emma, Scarlett, Noah, Aubrey, Elle, Gunner, and Gray; a special nephew that he raised, Wesley (Sandra) Lowman; a brother, Dan Mahon; 2 sisters, Kathleen Lowman and Frances Sargent; and a foster son, Kody Merrival. Butch is also survived by several other special nieces and nephews, cousins and good friends. He was preceded in death by his parents, Francis and Dorothy Mahon; a daughter, Tonya; and a brother, Richard Mahon. Visitation will be held from 9:30 a.m.-11:00 a.m., Tuesday, January 5, 2021, at the Tharp Funeral Home in Albia, with Butch’s family present to greet family and friends. Funeral services will be held at 11:00 a.m., Tuesday, January 5, 2021, at the Tharp Funeral Home in Albia, with Father Mark Yates, C.PP.S. officiating. Burial with military honors provided by the American Legion of Albia, Melrose and Lovilia will follow services at Oak View Cemetery in Albia. Due to the most recent proclamation and enhanced public health measures for the state of Iowa, masks will be mandatory for those in attendance over the age of 2 for both visitation and the funeral service. The service will be livestreamed on the Tharp Funeral Home Facebook page. The link to the livestream is https://fb.watch/2QlJBEM9Ut/ A memorial has been established to the International Foundation for CDKL5 Research in honor of his granddaughter, Emma Lowman.

The family of Burdette "Butch" Francis Mahon created this Life Tributes page to make it easy to share your memories.

Send flowers to the Mahon family.