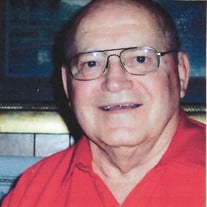 On October 26, 2019, at the age of 87 years, Boyd E. Paxston went to join his parents, who were Clifford and Ellen (Sharp) Paxston. He was born in Appanoose County, July 11, 1932. He started his schooling at “Blue Front” a country school in Monroe County, graduating from Moravia High School in 1949. He served in the Army from 1952-1954. He was a member of the American Legion, Masonic Lodge No. 252, and Shriners. On June 4, 1955, he married Virginia “Jean” Long. They made their home in Moravia, where he worked for Turner’s Furniture and Lumber, Mick Furniture, and Moravia Lumber. They then moved to Wapello, IA, where he worked for D&P Lumber and then on to Mt. Pleasant, IA, where he worked until his retirement in 1996 from UBC Lumber. He moved to Albia to spend the remainder of his life. Boyd is survived by his wife of 64 years, Jean Paxston; sister, Ann (Ron) Repp of Moravia; nephews, Chris (Kim) Repp of DeSoto, KS, Terry Repp of Moravia, and Robert (Natasha) Repp of Centerville; a great niece; great nephews; great-great nephews; an aunt; and several cousins and other relatives. He was preceded in death by his parents, Clifford and Ellen; and an infant brother, Leroy Brian. As per his request, he was cremated and a private burial will be held at a later date. Memorials may be directed to Friends of the Moravia Library, P.O. Box 398, Moravia, IA 52571.

The family of Boyd E. Paxston created this Life Tributes page to make it easy to share your memories.

Send flowers to the Paxston family.