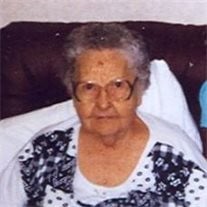 Bluebell Frances Repp, age 82, of Albia, Iowa died Monday, June 19, 2006 at the Oakwood Nursing & Rehabilitation Center in Albia. She was born July 16, 1923 in Wapello County, IA to Iris and Stella Smock. She married Delbert Pearl Repp on March 3, 1943 in Unionville, MO. He passed away January 18, 1983. Bluebell was a homemaker and she also worked at Smith Laundry in Albia. She was hard worker, and she dearly loved her family. She is survived by her children; Sharry (Bill) Kellogg of Albia, Ronnie (Deborah) Repp of Sigourney, Lois Repp of Albia, Delbert Repp, Jr. of Albia, Ricky Repp of Albia, and Julie Linville of Albia. Eleven grandchildren, and eleven great-grandchilderen also survive Bluebell. Bluebell was preceded in death by her parents; her husband; 2 sons, Gary Ancel and Drew Daniel Repp; 2 grandsons, Daniel Charles Kellogg, and Jeffery Kellogg. Funeral services will be held at 1:00 P.M. Wednesday, June 21, 2006 at the Winfield Funeral Home in Albia with Rev. Kevin Leveck officiating. Burial will be in Oakview Cemetery in Albia. Visitation will open after 2 P.M. on Tuesday, June 20 at the Winfield Funeral Home in Albia with the family present from 6-8 P.M. Tuesday evening. An Open Memorial has been established.

The family of Bluebell Frances Repp created this Life Tributes page to make it easy to share your memories.

Send flowers to the Repp family.