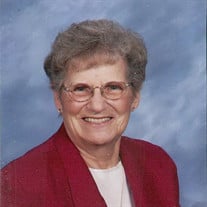 Blanche “Byrle” McCombs, age 92, passed away peacefully on Tuesday, February 28, 2017, under the care of Care Initiatives Hospice at her home in Albia. Byrle was born on February 27, 1925 to William Irving “Doc” and Elizabeth (Dobson) Bates at her home in Monroe County. She grew up and attended the Albia High School graduating with the Class of 1942. On November 1, 1942 she was united in marriage to George Joseph McCombs at her parent’s house in Albia. To this union three children were born, Joey, Colleen and Beth. Byrle was a homemaker all of her life. She also worked at the overall factory in Oskaloosa before taking a job at Trophy Glove in Albia. She was then employed at Chamberlains in Albia. She was the Director of Helping Hands for many years. Byrle was a member of the Evangelical United Brethren Church in Albia and then the Trinity United Methodist Church as the two churches merged. She taught Sunday School, was the director of the Youth Fellowship Group, was active with the Trinity United Methodist Women and a 4H leader. She enjoyed quilting, cooking, and was known for her pies. Her real joy in life was spending time with her family and friends, especially her grandchildren and great grandchildren whom she adored. Byrle is survived by her daughters, Colleen Thomas of Albia and Beth Miller of Belleville, Illinois; her four grandchildren, Barb Ford, Keri Thomas, Melisa Sands and Sarah Miller; her five great grandchildren, Erin Ford, Alex Ford, Gavin Sands, Garrett Sands and Alison Sands; and two sisters-in-law, Winifred Schertz and Dorothy Schertz. She is also survived by several nieces, nephews, cousins and good friends. She was preceded in death by her husband, George McCombs; a son, Joey McCombs; her parents, William “Doc” and Elizabeth; eight siblings; a son-in-law, Eldon Thomas and her mother and father in-laws, John and Ruby McCombs. Funeral services will be held at 10:30 a.m., Saturday, March 4, 2017, at Trinity United Methodist Church in Albia, with Pastor Roger Henry officiating. Burial with will follow the service at the Service Chapel Cemetery in Albia. Visitation will be held from 1:00 p.m. - 8:00 p.m. Friday, March 3, 2017, at the Tharp Funeral Home in Albia, with Byrle’s family present from 6-8 p.m. to greet family and friends. A memorial has been established to the Trinity United Methodist Church.

The family of Blanche "Byrle" McCombs created this Life Tributes page to make it easy to share your memories.

Send flowers to the McCombs family.