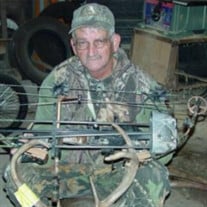 Billy Joe Collins, age 67, of Exline, IA, passed away on Friday, November 26, 2021, at his home. Billy was born on October 20, 1954, in Centerville, IA, to Harold Truman and Avel Marie (Stevens) Collins. He grew up attending school in Centerville and graduated from the Centerville High School with the Class of 1973. On July 31, 1976, he was united in marriage to Sandra Downen at the Methodist Church in Unionville, MO. Billy and Sandy shared 45 years of marriage prior to his passing. Billy worked at the Bennett Box Company in Centerville before going to work at Varese Manufacturing. He later worked for the City of Moulton and lastly at the Green Circle Restaurant in Centerville. He and Sandy lived in Exline for 40 years before moving to Centerville due to his declining health. Billy was an avid outdoorsman who loved hunting, fishing, and trapping. He cherished the time he spent with his family, especially with his grandchildren teaching them to hunt and fish. Billy is survived by his wife, Sandy; 4 daughters, twins Janea Claver and Jeanine (Randy) McDonald, and Mary Collins, all of Centerville, IA, and Linda (Joel) Hemp of Moberly, MO; 8 grandchildren, Damien (Adrian) Claver, Makayla Claver, Jordan McDonald, Zachery (Katy) McDonald, Jake Collins, Jayden Hemp, Jace Collins, and Jax Hemp; 3 great grandchildren, Joseph Gadwa and Billy and Elaina Claver; and a sister, Peggy (Butch) Garr. Billy is also survived by many nieces and nephews. Billy was preceded in death by his parents, Harold Truman and Avel Collins; and siblings, Kenny, Harold, Richard, Dickie, Donnie, Linda, Delores, Rose, Darlene, Nancy, and Tommy. A Celebration of Life will be held from 11:00 a.m.-3:00 p.m. on Sunday, December 12, 2021, at the Exline Community Center in Exline, IA. A private family burial will be held at a later date. An open memorial has been established to the family.

Billy Joe Collins, age 67, of Exline, IA, passed away on Friday, November 26, 2021, at his home. Billy was born on October 20, 1954, in Centerville, IA, to Harold Truman and Avel Marie (Stevens) Collins. He grew up attending school... View Obituary & Service Information

The family of Billy Joe Collins created this Life Tributes page to make it easy to share your memories.

Send flowers to the Collins family.