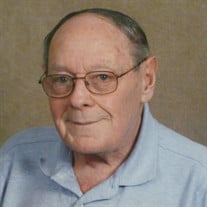 Billie Eugene Willetts, age 90, of Albia, passed away on Monday, September 16, 2019, surrounded by his loved ones, at the VA Central Iowa Health Care System in Des Moines, IA, after a long struggle with Parkinson’s. The VA facility graciously honored him with an honor’s ceremony upon his passing. Billie was born on May 4, 1929, in Albia, IA, to James Elbert and Eura Hazel (Campbell) Willetts. He grew up and attended school in Albia, graduating from the Albia High School. Billie served his country in the United States Army during the Korean War where he served with the 5th Army Company I 7th Combat Infantry from 1950-1952. Later he reenlisted from 1952-1955 and was stationed in Germany. Upon returning home from the military, Billie worked for a shoe company in Chicago before moving to Des Moines where he worked for Bishop’s Buffet for many years. He returned to Albia in October 2007. Billie was very social, enjoyed visiting with others, and never knew a stranger. He loved his family, especially his nieces and nephews and great nieces and great nephews. He enjoyed reading, watching television, and talking politics. In his younger years, he enjoyed being outdoors and fishing and later in life, he enjoyed getting together for boys night out and eating steak. Billie is survived by a brother, Richard L. Willetts of Albia, IA; 2 nephews, James A. (Marsha “Marti”) Willetts of Centerville, IA and David R. Willetts of Richfield, MN; 1 niece, Jennette A. (Phillip) Robinson of Prior Lake, MN; a sister-in-law, Margaret J. Willetts of Prior Lake, MN; 3 great nieces, Kristine J. Eyheralde of Centerville, IA, Beth A. Robinson of Minneapolis, MN, and Sarah L. (Timothy) Johnson of St. Paul, MN; 1 great nephew, Michael J. (Katja) Willetts of Reston, VA; and 7 great-great nieces, Katja (Jake) Suther of Solon, IA, Kethryn A. Eyheralde, Emily A. Eyheralde, Samantha M. Sanders, and Madelyn M Sanders all of Centerville, IA, and Rowyn A. and Junia L. Johnson of St. Paul, MN. He was preceded in death by his parents, James and Eura Willetts; a brother, Kenneth Elbert Willetts; a sister-in-law, Martha Jane Willetts and a nephew in infancy, Richard Willetts. Visitation will be held from 10:00 a.m. ~ 11:00 a.m. on Saturday, October 19, 2019, at the Tharp Funeral Home in Albia, with Billie’s family present to greet family and friends. A celebration of life will be held at 11:00 a.m., Saturday, October 19, 2019, at the Tharp Funeral Home in Albia, with Tom Williamson officiating. Burial with military rites provided by the American Legion of Albia, Melrose and Lovilia will follow services at Oak View Cemetery. A memorial has been established to the Welcome Home Soldier Memorial.

Billie Eugene Willetts, age 90, of Albia, passed away on Monday, September 16, 2019, surrounded by his loved ones, at the VA Central Iowa Health Care System in Des Moines, IA, after a long struggle with Parkinson&#8217;s. The VA facility graciously... View Obituary & Service Information

The family of Billie Eugene Willetts created this Life Tributes page to make it easy to share your memories.

Billie Eugene Willetts, age 90, of Albia, passed away on Monday,...

Send flowers to the Willetts family.