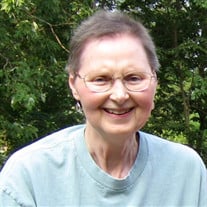 Beverly Joanne Mick, age 78 years and eight days, of Albia, Iowa, passed away on Tuesday, June 28, 2016, at the Monroe Care Center in Albia. A Celebration of Life for Beverly will be held on August 6, 2016, at 2:00 p.m. at Bussey United Methodist Church, Bussey, Iowa, with Pastor Neil Montz officiating. Visitation will be held following the service at Bussey United Methodist Church with the family present. A private family burial at Greenlawn Cemetery in Bussey will be held at a later date. Beverly was born on June 20, 1938, in Bussey, Iowa to Esther Samuel and Frederick Wayne Mick. She was very proud of her community and was active in the Bussey MYF, the local library and sports. She excelled at basketball as a proud member of the Bussey Yellow Jackets girls basketball team, and as a two-time All-State player helped lead the team in the 1955 Iowa Girls State Championships. She graduated from Bussey High School in 1956, attended Central College in Pella, Iowa, on a National Merit Scholarship, graduating in 1960. She completed her master’s in math from San Diego State University, one of only two women admitted to the program. Upon completing her education, she taught mathematics in Gowrie, Iowa, before moving to California, where she continued to teach math for 40 years at various levels in schools in Santa Maria, Arroyo Grande, and San Luis Obispo areas. In 1995, she received a “Women in Education-Excellence Award” from Cuesta College where she had been a math instructor for many years. Beverly had a great love of local Iowa history and wrote, Soaring Wings, A Song of Remembrance, which she provided to locals schools and libraries. Previously, she had written a set of math workbooks (1978-1981), which she also shared with teachers and schools in both California and Iowa, and an unpublished short story entitled Highway History, Des Moines to Albia on Highways 163, 63, and 137. She had a passion for art, especially water colors of communities and nature of the West Coast and the Southwest. She purchased many pieces of art in these styles, sharing with friends and donating many to Cuesta College to help establish a continuous art display at the college. Additionally, she undertook the task of identifying and marking the species of all the trees on the Cuesta campus. In March of 2008, she purchased the old Open Bible Church in Albia, Iowa, refurbished it to its original architectural and interior decor, and renamed it The Old Vic. It was used for various public functions until July 2009. Beverly was active in the communities where she lived. A short list of her activities include docent for The Old Vic, Albia Chamber of Commerce, Bussey United Methodist Church, DAR, and giving presentations of her book Soaring Wings. Always a teacher, she continued tutoring individuals in math and French, almost until her death. Beverly is survived by her brother, Lt. Col. (Ret) Ronald Wayne Mick of Arlington, TX; her sister, Carolyn Lee Mick DeCora of Bussey, Iowa; one niece, Wendy Dawn DeCora of Iowa City; two nephews, Gregory Wayne (Nylpha) Mick of Abilene, TX, and Scott Christopher Mick of McKinney, TX; and three great-nephews, Sean Frederick Mick, John David Mick, and Timothy Floyd, all of Abilene, TX. She is also survived by one uncle, Bernard E. Mick of Waverly, Iowa, and many cousins and friends. She is preceded in death by her parents; her maternal grandparents, Richard and Elizabeth (Baxter) Samuel; her paternal grandparents, Fred and Sylvia (Olson) Mick; and one nephew. The family thanks the Monroe County Care Center, the Monroe County Hospitals and Clinics, and Dr. Haas for their loving care of Beverly during her several illnesses. A very special thank you to cousins, Peggy Newman, Theresa Plum, Jane Haywood, and Jill Mick for all the hours they spent visiting and assisting Beverly however she needed.

Beverly Joanne Mick, age 78 years and eight days, of Albia, Iowa, passed away on Tuesday, June 28, 2016, at the Monroe Care Center in Albia. A Celebration of Life for Beverly will be held on August 6, 2016, at 2:00 p.m. at Bussey United... View Obituary & Service Information

The family of Beverly Joanne Mick created this Life Tributes page to make it easy to share your memories.

Send flowers to the Mick family.