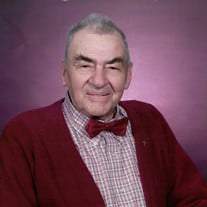 Bernard Elmer Dicks age 96, of Albia, passed away on Saturday, July 30, 2016, at the Monroe Care Center in Albia. Bernard was born July 12, 1920, to Arthur Ernest and Maud Irene (Tyrrel) Dicks. He was married to Rosella Kirkham on May 31, 1942, at the United Brethren parsonage in Albia, Iowa. Rosella preceded Bernard in death on May 23, 2000. They bought Rosella’s uncle’s house in the country not far from where they grew up and settled there all their married life, 58 years. The majority of Bernard’s working life was with the family business, Dicks Brothers painting. He also raised a small cow/calf herd and later raised sheep. He was a faithful member of the Albia United Methodist Church and taught Sunday School for 30+ years. In 1965, he joined the Masonic Lodge Astor #505, also going to the next order of Chapter of Royal Arch. Bernard had many interests and hobbies. His earliest was flying a piper cub airplane. His longtime friend, Bob Trussell, was his flying instructor. He was an avid civil war buff and took many trips to civil war memorial sites in retirement. On one occasion he came home with a replica civil war cannon. Many Albians enjoyed Bernard shooting the cannon at the start of the Restoration Days parade. Other interests included collecting vintage guns and coins. He had a woodworking shop in the barn and made many unique pieces for family and friends. He also enjoyed carving and making large carvings from tree trunks, a large cigar store Indian and totem pole. In later years, he was an avid reader. Bernard is survived by his children, daughter Leslie (Lee) Daub of Nevada, IA and son Arthur (Pam) Dicks of Albia, IA; four grandchildren, Stacie (Mike) Kozlowski, Jason Daub, Marcie (Aaron) Kamerick, and Matt Dicks; and ten great grandchildren. He was a ‘family’ man and enjoyed being around family. He was preceded in death by his wife, Rosella; parents, Arthur and Maud; and four brothers, Everett, Francis, Roy in infancy and Howard Dicks. Funeral Services will be held at 10:30 a.m., Wednesday, August 3, 2016, at Trinity United Methodist Church in Albia, with Pastor Roger Henry officiating. Burial will follow services at Oak View Cemetery in Albia. Visitation will be held from 1:00 p.m. to 8:00 p.m. Tuesday, August 2, 2016, at Tharp Funeral Home in Albia, with Bernard’s family present from 5:00 to 8:00 p.m. Masonic Rites provided by Astor Lodge #505 will be held at 7:00 p.m. Memorials have been established to Trinity United Methodist Church, Albia Public Library or to the Welcome Home Soldier Memorial.

Bernard Elmer Dicks age 96, of Albia, passed away on Saturday, July 30, 2016, at the Monroe Care Center in Albia. Bernard was born July 12, 1920, to Arthur Ernest and Maud Irene (Tyrrel) Dicks. He was married to Rosella Kirkham on May 31,... View Obituary & Service Information

The family of Bernard Elmer Dicks created this Life Tributes page to make it easy to share your memories.

Bernard Elmer Dicks age 96, of Albia, passed away on Saturday,...