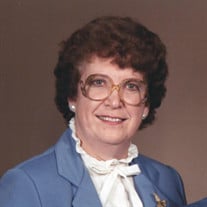 Barbara Shelquist, 94, passed away April 10, 2022, at the home of her daughter in Hot Springs, South Dakota. Barbara was born on July 14, 1927, to Hugh and Louie Scott Gray in Albia, Iowa. She attended Halfway Prairie School and graduated from Albia High School at the age of 16 in 1944. Due to the war and the need for teachers, she started teaching at the age of 17 at Pleasant Point School and taught there two years. She married Ivan D. Shelquist on March 23, 1946. Three children were born to this union: David Lee, Galin Dean, and Marilyn Louise. The family farmed north of Albia until 1963 when they purchased a farm near Moravia. Barbara worked at Ewers Shoe Store and at Johnson and Johnson’s. In addition, she served on the Monroe County Extension Council and was a 4-H leader for many years. She attended Service Presbyterian Church, Moravia EUB Church, Joy Community Fellowship in Hot Springs, and was currently a member of Trinity United Methodist Church. In their younger years, Barbara and Ivan enjoyed square dancing. Barbara raised a bountiful vegetable garden each year and maintained flower gardens until in her 90’s. She enjoyed tole painting and oil painting but found her true hobby in quilting. She was a member of the Albia Crazy Quilters, the Sewing Sisters in Moravia, and the Material Girlz Quilt Guild in Centerville. Barbara enjoyed watching game shows like Wheel of Fortune, Jeopardy, and Family Feud, as well as doing word puzzles. She enjoyed traveling, especially to Alaska, Hawaii, Nova Scotia, and San Francisco, and spending time in the Black Hills of South Dakota. Barbara was preceded in death by her husband, Ivan, on December 25, 1998; by her parents, Hugh and Louie Gray; by her in-laws, Harry and Mary Shelquist; by brothers-in-law George Shelquist, Harry Jr. Shelquist, Richard Shelquist, Carl Shelquist, and Paul Shelquist, by sister-in-law, Edna Shelquist Robinson, and by son-in-law Jimmie Rowley. She is survived by sons David of Moravia and Galin of Albia and daughter Marilyn Rowley of Hot Springs, South Dakota, as well as grandchildren: Tyler (Kourtni) Shelquist of Oskaloosa, Bobby Shelquist of Albia, and Molly (Andy) Mullen of Mystic, and step-grandson Christian Rowley of Chicago. She is also survived by great-grandchildren Jace, Grady, and Hattie of Oskaloosa; Gracie of Albia, and Callen and Freya (and one on the way!) of Mystic; and by two step-great-grandsons, Mikk and Zakk of Chicago. She is also survived by sisters Joann Ahn and Donna Kromray of Albia, as well as many nieces, nephews, and cousins. Visitation will be held from 2:00 p.m.-7:00 p.m. on Thursday, April 21, 2022, at the Tharp Funeral Home in Albia, with Barbara’s family present from 5:00 p.m.-7:00 p.m. to greet family and friends. Memorial services will be held at 10:00 a.m. on Friday, April 22, 2022, at the Tharp Funeral Home in Albia, with Pastor Roger Henry officiating. Burial will follow services at Service Chapel Cemetery in Albia. A memorial has been established to Trinity United Methodist Church in Albia or to Joy Community Fellowship in Hot Springs, South Dakota.

Barbara Shelquist, 94, passed away April 10, 2022, at the home of her daughter in Hot Springs, South Dakota. Barbara was born on July 14, 1927, to Hugh and Louie Scott Gray in Albia, Iowa. She attended Halfway Prairie School and graduated... View Obituary & Service Information

The family of Barbara Shelquist created this Life Tributes page to make it easy to share your memories.

Send flowers to the Shelquist family.