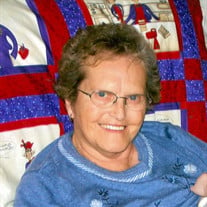 Barbara Jean King, age, 85 of Oskaloosa, formerly of Albia and Bussey, passed away Monday, September 4, 2017, under the care of Northern Mahaska Specialty Care Center. Barbara was born on June 11, 1932, to Samuel and Maudie (Tulk) Barnhill in Knoxville, Iowa. She attended school in Bussey and graduated from Bussey High School with the class of 1950. Barbara married Jr. King on March 3, 1951, in Knoxville. They shared 58 years of marriage and were blessed with three daughters; Vicki, Cindy, and Toni. Barbara was a secretary for the Twin Cedars Elementary School for 24 years, before retiring in 1992. She was a member of the Bussey United Methodist Church. Barbara had many hobbies. In her younger years, she enjoyed riding motorcycles with her husband. She was a member of the Flying Farmers and enjoyed flying with Jr. She was also a member of the Motor Iowa Club and she and Jr. traveled the state with their antique cars. They enjoyed traveling and she and Jr. wintered in Mission, Texas for 20+ years. She loved sewing, quilting, painting, and doing crafts. She enjoyed being outdoors, doing things such as gardening and camping. She and Jr. camped at the Iowa State Fair for many years. Barbara embraced the holiday times, for which she loved to decorate and dress up in holiday attire. She also loved to cook and above all, enjoyed spending time with her family and friends, especially her grandchildren and great-grandchildren. Barbara is survived by her three daughters, Vicki and Terry Pettyjohn of Oskaloosa, Cindy and Randy Clark of Bussey, and Toni and Kevin Walter of Albia; five grandchildren, Amie (Jim) Koffman, Austin (Jessica) Clark, Amanda (Adam) Rozenboom, J.D. (Natalie) Reed, and Christi (Todd) Westercamp; eleven great grandchildren, Jayce, Courteney, Cayel, Jaylea, Carter, Jaden, Lily, Ruby, Shelby, Sayler, Simon, and two great-grandchildren on the way. Barbara is also survived by 2 sisters, Sabra and Carol; and many nieces, nephews, cousins, and good friends. Barbara is preceded in death by her husband, Jr. King; a great-granddaughter, Parker Westercamp; her parents, Samuel and Maudie; 3 brothers; and 4 sisters. Funeral services will be held at 10:30 a.m., Thursday, September 7, 2017, at the Bussey United Methodist Church in Bussey. Burial will follow the service at Greenlawn Cemetery in Bussey. Visitation will begin at 4:00 p.m. until 8:00 p.m. on Wednesday, September 6, 2017, at the Tharp Funeral Home in Albia, with Barbara’s family present from 6:00 p.m.-8:00 p.m. to greet family and friends. A memorial has been established to Serenity House in Oskaloosa.

The family of Barbara Jean King created this Life Tributes page to make it easy to share your memories.

Barbara Jean King, age, 85 of Oskaloosa, formerly of Albia and...

Send flowers to the King family.