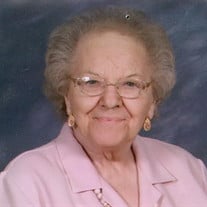 Arlene Emma (Dee) Reinke, 91, died Sunday January 29, 2017 at Monroe Care Center in Albia, Iowa. Arlene was born on July 25, 1925 to Leonard and Gladys (Wendel) Dee in Lansing, Iowa. Arlene was united in marriage to Lawrence Reinke on February 16, 1946 in Lansing, Iowa and they moved to Albia, Iowa in 1948. Arlene was a homemaker her whole life to Larry and her sons. She also worked as an Avon Representative. She was a lifelong member of the Trinity United Methodist Church in Albia and enjoyed volunteering her time there and helping every chance she could. She enjoyed cooking, baking and gardening. She also loved to write letters to her family, friends, and long term acquaintances. Her real joy in life was spending time with her family and friends. Arlene is survived by three sons, Dennis (Anne) Reinke of Richmond, Virginia, Richard (Sherry) Reinke of Scottsdale, Arizona, and Bryan (Cindy) Reinke of Lake of the Ozarks, Sunrise Beach, Missouri; seven grandchildren, Matthew Reinke of Burke, Virginia, Angela Pugh of Charleston, West Virginia, Amanda Reinke of Kirkland, Washington, Heather McDonough of Phoenix, Arizona, Wes Reinke of Scottsdale Arizona, Kali Ducas of Gilbert, Arizona, and Suzanne Reinke of Phoenix, Arizona; and 13 great-grandchildren. Arlene was preceded in death by her husband, Lawrence Reinke; parents, Leonard and Gladys (Wendel) Dee; two brothers, Delbert Dee and Donald Dee; one sister, Dorothy Brightwell and one son, David Reinke. A memorial service will be held at 10:30 a.m. Thursday February 2, 2017 at Trinity United Methodist Church, Albia, Iowa with Rev. Roger Henry as the Officiant. Visitation will be held from 5:00 p.m. – 8:00 p.m., Wednesday, February 1, 2017 at the Tharp Funeral Home in Albia with Arlene’s family present throughout to greet family and friends. Visitation will open again at 9:30 a.m. on Thursday, February 2, 2017, at the Trinity United Methodist Church until service time at 10:30. Burial will follow services at the Oakview Cemetery in Albia. A memorial has been established to the Trinity United Methodist Church in Albia.

The family of Arlene Emma Reinke created this Life Tributes page to make it easy to share your memories.

Send flowers to the Reinke family.