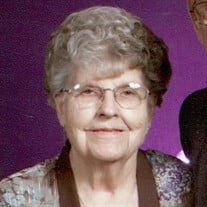 Ardyce Vivian Brown, age 93, of Albia, passed away on Tuesday, February 26, 2019, at Centerville Specialty Care in Centerville. Ardyce was born on September 26, 1925, in McCool Junction, Nebraska, to William and Freda (Peterson) Hagerman. She grew up and attended school in Moravia, IA. On August 17, 1946, she married LeRoy Brown at the Iconium Christian Church in Iconium. To this union 2 daughters were born, Sheryl and Carol. They shared 68 years of marriage prior to his passing on March 1, 2015. After high school, Ardyce went to school at the University of Northern Iowa where she obtained her teaching degree. She then taught country school before she and LeRoy got married and moved to Ottumwa, IA where she worked at Morrell’s. Ardyce and LeRoy moved to Albia in 1960. She worked at several different places in Albia, including Spurgeon’s clothing store, Gambles, Dr. O’Hara’s dental office, Illingworth’s Jewelry, and was a bus monitor for Head Start. Ardyce was a member of the First Christian Church in Albia, where she was very active in Bible studies and other church groups. She enjoyed being outdoors, gardening, and camping. She loved to cook and bake and was known for her cookies, red velvet cake, and whoopie pies. She delighted in spending time with her family and friends, especially her grandchildren whom she loved to take on trips and camping. Ardyce is survived by her two daughters, Sheryl (Tom) Taatjes of Tucson, AZ and Carol (Gary) Scott of Albia; 6 grandchildren, Amy (Chad) Ziller, Sarah (Jason) Gustafson, Elizabeth (Miguel) Miranda, Amber Scott, Michele Scott (Taylor Royer), and Jaimie (Tyson) Patton; and 14 great-grandchildren, Olivia, Evan, Holly, Juliet, Addison, Kerrigan, Blake, Brooke, Trenton, Selina, Braiden, Felix, Hadley, and one expected to arrive in May. Ardyce is also survived by several nieces and nephews. She was preceded in death by her husband, LeRoy Brown; her parents, William and Freda Hagerman; and 2 brothers, Arlin and Rex. Visitation will be held from 11:00 a.m.-8:00 p.m. on Monday, March 4, 2019, at the Tharp Funeral Home in Albia, with Arydce's family present from 5:00-8:00 p.m. to greet family and friends. Memorial services will be held at 10:30 a.m., Tuesday, March 5, 2019, at the First Christian Church in Albia, with Pastor Lynda Carlson officiating. Burial will follow services in Oak View Cemetery in Albia. Memorials may be made to the First Christian Church in Albia.

The family of Ardyce Vivian Brown created this Life Tributes page to make it easy to share your memories.

Ardyce Vivian Brown, age 93, of Albia, passed away on Tuesday,...

Send flowers to the Brown family.