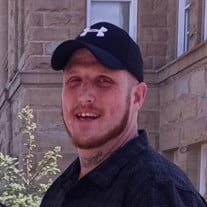 Anthony “Tony” Brooks Cook, age 36, of Albia, passed away on Wednesday, July 28, 2021, at Monroe County Hospital in Albia, IA. Tony was born on October 31, 1984, to Randall “Randy” and Kimberly Sue (Martinache) Cook at the Knoxville Hospital in Knoxville, Iowa. He grew up and attended Cobre High School in Silvercity, New Mexico. On July 3, 2004 he was united in marriage to Katie Major in Knoxville, Iowa. To this union, 3 children were born, Anthony, Conner, and Brooklyne. Tony worked as a laborer at Iowa Aluminum in Albia. He loved the outdoors, especially camping and fishing. He also had a love for music. He enjoyed watching football, especially his favorite team, the Dallas Cowboys in which he was an avid fan, UFC, and basketball, especially when LeBron James was playing. Tony was very loyal to his friends and family, especially his children. He had a very infectious laugh that would make anyone in his presence laugh as well. Tony is survived by his wife, Katie; 3 children, Anthony, Conner, and Brooklyne; his parents, Kim Cook and Randy Cook; 2 brothers, Brett (Lacy) Tangeman, and Matthew Cook; a grandfather, Lyle Harvey; his mother-in-law and father-in-law, Karyn (Dan) Houser; and a sister-in-law, Crystal (Jerry) Humphrey. Tony is also survived by many aunts, uncles, nieces, nephews, cousins, and good friends. He was preceded in death by his grandparents, Fred and Betty Cook, and Kathy Harvey; his father-in-law Mark Major; and his best friend, Matthew “Stevie” Shrunk. Memorial services will be held at 2:30 p.m., Tuesday, August 3, 2021, at the Tharp Funeral Home in Albia with Pastor Bruce Rietveld officiating. Burial will follow services at the Bellefountaine Cemetery in Mahaska County. In lieu of flowers a memorial will be determined at a later date.

The family of Anthony "Tony" Brooks Cook created this Life Tributes page to make it easy to share your memories.

Send flowers to the Cook family.