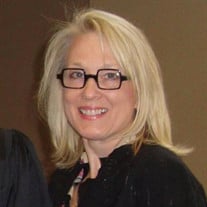 Annette Jennings Scieszinski, 65, completed her circle of life on February 26, 2021, dying in the embrace of family at the Monroe County Hospital after a battle with pancreatic cancer. She was born August 10, 1955, in Muscatine, Iowa; the first child of Royal Dee Jennings and Mae June (Mohnssen) Jennings. Annette grew up on the family farm, graduated from Winfield-Mt. Union Community School in 1973 as Valedictorian, and received a Bachelor of Arts degree in 1977 from Iowa Wesleyan University Summa Cum Laude. In 1980, she earned a Law Degree from the University of Iowa, where she was a published author and editor of the Iowa Law Review. At the University of Iowa, Annette met her best friend and soulmate, fellow University of Iowa student John Joseph Scieszinski. The two married August 12, 1979, and moved to Albia, Iowa, where Annette started her law practice and was elected Monroe County Attorney, and where John opened a dental office. Over the years, the couple welcomed four daughters, who became the center of joy in their lives. Annette and John hosted holiday dinners with the extended families for nearly 40 years, stressing importance of those relationships. Annette was an accomplished artist, focusing her award-winning efforts in oil painting. She initiated and supported art activities in the schools and community and served as President of the Monroe County Arts Council. She and John were active in historic preservation, sponsoring three National Register of Historic Places over time. Annette empowered youth through her work in the schools and community. She was a 4-H leader for 25 years. She also served in various service capacities over the years for the Iowa Law School, Drake University Law School, and Iowa Wesleyan University, recently assuming the chairmanship of the Iowa Wesleyan Board of Trustees. Annette relished her career in the law, where she could help people solve problems. She practiced law 15 years, the last 12 with the Scieszinski & Owens Law Firm, until 1996, when Governor Terry E. Branstad appointed her as a District Court Judge for the 10 counties of Iowa District 8-A. She served 20 years before retirement, and she worked as a Senior Judge for three years. In the course of Annette’s judicial career, she was elected President of the Iowa Judges Association and received the Association’s highest honor, the Award of Merit. On the national level, Annette attained the chairmanship of the National Conference of State Trial Judges and was a leader in judicial education with an emphasis in professional ethics. Annette is survived by her husband Dr. John J. Scieszinski of Albia; four daughters: Lauren Marie Scieszinski, of Kingston, Tennessee; Susan Claire Scieszinski, of Centerville, Iowa; Brooke Anastasia Scieszinski of Brooklyn, New York; and Caroline Rose Scieszinski of Mt. Pleasant, Iowa. The Scieszinskis have four grandchildren: Emily Marie Bennett, Paige Elizabeth Bennett, and Norah Katherine Bennett of Kingston, Tennessee; and Drake Thomas Daniels of Centerville, Iowa. Survivors also include her mother, Mae June Jennings of Winfield, Iowa, sisters: Dr. Cynthia Louise Phillips of Agency, Iowa, and Barbara June Delaney of Cedar Falls, Iowa; brothers: Alvin Benjamin Jennings of Iowa City, Iowa, and Gerald Douglas Jennings of Winfield, Iowa; and several nieces and nephews. She was preceded in death by an infant brother, Bradley James Jennings, and her father, Royal Dee Jennings. Annette was always motivated by service to others. In a final act of service, she donated her body to science through the University of Iowa. A private family Memorial Mass will be held on Saturday, March 6, 2021, at 1:00 p.m. at St. Mary’s Catholic Church in Albia with Father Mark Yates C.PP.S. officiating. Services will be livestreamed on the Tharp Funeral Home Facebook page. In lieu of flowers, memorial contributions may be made to Iowa Legal Aid, the Monroe County 4-H Foundation, or any charity of the donor’s choice.

Annette Jennings Scieszinski, 65, completed her circle of life on February 26, 2021, dying in the embrace of family at the Monroe County Hospital after a battle with pancreatic cancer. She was born August 10, 1955, in Muscatine, Iowa; the first... View Obituary & Service Information

The family of Annette Jennings Scieszinski created this Life Tributes page to make it easy to share your memories.

Send flowers to the Scieszinski family.