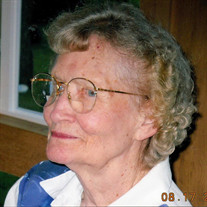 Ann Lou Booth, age, 92 of Albia, passed away Saturday, September 2, 2017, at Vista Woods Care Center in Ottumwa, Iowa. Ann was born on March 1, 1925, to Robert O. and Beulah (Crowley) Higgins in Webster County, Kentucky. She grew up and attended school, graduating in Hanson, Kentucky. She then went on and graduated from business school in Pontiac, Michigan. Ann worked at a department store while going to school which ultimately led to her meeting her future husband, Thomas, who was on furlough from the military. On November 4, 1944, she was united in marriage to Thomas Booth in Versailles, Ohio. To this union two children were born, Michael and Vera. Ann and Thomas shared 54 years of marriage together until his passing in 1990. Ann worked at General Motors in Pontiac, MI before she and her husband moved to Albia where she worked for the Albia High School in the cafeteria. In 1961, she began working for the Monroe County Hospital where she worked for many years, retiring in 1994. Ann was a member of the First Christian Church and the Albia Women’s Club. She enjoyed quilting and knitting afghans and pot holders, and being outdoors, doing things such as vegetable and flower gardening, as well as camping at Lake Rathbun. Her real joy in life was spending time with family and friends, especially for the holidays when she loved to prepare large southern style meals and was known for her cornbread dressing. Ann is survived by her children, Michael David Booth of Rifle, Colorado and Vera Vandello of Ottumwa; 3 grandchildren, Amy, Joseph and Christopher; and 4 great-grandchildren, Nathan, Zackary, Nicholas and Violet; and many nieces, nephews and good friends. She is preceded in death by her parents, Robert and Beulah; her husband Thomas; 4 brothers; and a great-granddaughter. Funeral services will be held at 11:00 a.m., Friday, September 8, 2017, at the Tharp Funeral Home in Albia, with Pastor Lynda Carlson officiating. Burial will follow the service at Oak View Cemetery in Albia. Visitation will begin at 9:00 a.m. until the time of service Friday, September 8, 2017, at the Tharp Funeral Home in Albia, with Ann’s family present to greet family and friends. An open memorial has been established in Ann’s name to be determined at a later date by the family.

The family of Ann Lou Booth created this Life Tributes page to make it easy to share your memories.

Send flowers to the Booth family.