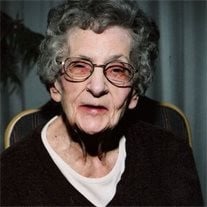 Anita Flora O'Neill, age, 89, died early Friday, December 28, 2007, at the Monroe County Hospital in Albia, Iowa. Anita was the fourth child born to Antonio and Maria (Cappellin) Nicoletto on September 25, 1918 at Whiteburgh, Iowa, a coal mining town. She married Mike J. O'Neill on January 5, 1954 in Gary, Indiana. To this union, one daughter was born, Mary Ellen. Anita grew up in a coal mining towns of Nineteen, Buxton, and Consol. At age eighteen she began work at Gabe Susin's grocery store in Georgetown, where she worked until age thirty-five. She then became a homemaker. Anita was a member of St. Mary's Catholic Church in Albia since 1986, and a golden age member of St. Mary's Altar and Rosary. Prior to 1986, she was a member of St. Patrick's Catholic Church in Georgetown. Anita loved to cook, read, and watch TV. She loved to visit with family and friends. She especially loved to spend time with her three grandsons, having been their babysitter when they were young. They were the light of her life! Anita was preceded in death by her husband, her parents, a sister Minnie and a brother Tony. She is survived by her daughter, Mary Ellen and husband Jack Baker of Albia; three grandsons, frater Alban of Rome, Italy, Mike Baker and wife Ashley of North Liberty, and Nick Baker of Albia. Anita is also survived by a sister Mary Massick of Burlington, and many nieces, nephews, cousins, and friends. Funeral services will be held at 10:30A.M., Monday, December 31, 2007, at the St. Mary's Catholic Church in Albia, with Rev. Michael E. Volkmer C.PP.S. officiating. Burial will follow services at St. Patrick's Cemetery in Georgetown. Casketbearers will be Mike Baker, Nick Baker, John Crall, Don Crall, Jim O'Neill, and Roy Landsperger. Visitation will begin at 9:00 A.M., Sunday, December 30th, at the Winfield Funeral Home in Albia. Anita's family will be present throughout the day and evening. At 4:00 P.M., Sunday a rosary will be led by St. Mary's Altar and Rosary, and a Christian wake will be held at 6:30 P.M., Sunday evening. A memorial may be given to the wishes of the family and will be established at a later date.

The family of Anita O'Neill created this Life Tributes page to make it easy to share your memories.

Send flowers to the O'Neill family.