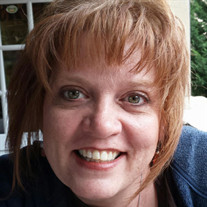 Angela Darlene Uber, age 48, of Albia, passed away Wednesday, September 20, 2017, surrounded by her family at her home in Albia under the care of Care Initiatives Hospice. She was born January 24, 1969 to Charles Ahart and Zonia "Sue" Hornbeck in Parkersburg, West Virginia. She grew up and attended Hamilton High School in Indiana and graduated with the Class of 1987. On August 20, 1988 she was united in marriage to Ron Uber in Angola, Indiana. To this union three children were born, Josh, Cameron and Kaitlin. Angela worked as a secretary in the water office of Butler, Indiana. She was also the secretary for the Butler Church of Christ before being elected as a town trustee. After moving to Fairfield she worked as an agent for Cummings State Farm Insurance. She later went back to school at Indian Hills Community College and received her LPN. Angela and Ron moved to Tennessee where she worked for a couple long term care facilities. They eventually moved back to Iowa and she worked for the Ottumwa Hospital Clinic System. Angela was a member of the Cornerstone Community Church in Albia where she was very active in the Women’s Club. She enjoyed doing various crafts, quilting, sewing, and in her younger years she enjoyed making Christmas candy and was known for her fudge. Her real joy in life was spending time with her family and friends. She is survived by her husband, Ron Uber; her children, Josh Uber, Cameron Uber and Kaitlin (Stephen) Cowie; a grandson, Kristopher Uber; her father, Charles Ahart; her step-father, Gary Casto; her siblings, Tammy (Ellis) Conley, Steve Casto, Chuck (Tracy) Ahart, Kary (Dallas) Phelps, and Kim (Kevin) Harlow. She is also survived by five nieces, four nephews and one great niece. She is preceded in death by her mother, Sue Jacquay; her step-father, Mark Jacquay; a step-mother, Becky Ahart; a niece, Natascha Elizabeth Willms and a nephew, Samuel Ray Francis Hawkins. Funeral services will be held at 10:30 a.m., Tuesday, September 26, 2017, at the Cornerstone Community Church in Albia with Pastor Mark Brandt officiating. Angela’s body will be cremated following services per her wishes and private family burial will be held at a later date. Visitation will begin at 1:00 p.m. until 8:00 p.m. on Monday, September 25, 2017, at the Cornerstone Community Church in Albia, with Angela’s family present from 4:00 p.m.-8:00 p.m. to greet family and friends. A memorial has been established to the Hope House in Iowa City.

Angela Darlene Uber, age 48, of Albia, passed away Wednesday, September 20, 2017, surrounded by her family at her home in Albia under the care of Care Initiatives Hospice. She was born January 24, 1969 to Charles Ahart and Zonia "Sue"... View Obituary & Service Information

The family of Angela Uber created this Life Tributes page to make it easy to share your memories.

Send flowers to the Uber family.