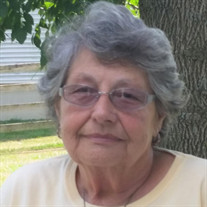 Alice Shaw Davis, age 85, of Albia, passed away on Thursday, February 11, 2021, at her home in Albia, IA. Alice was born on July 15, 1935, to Carl and Armenta (Owens) Zotz in Rock Island, IL. She graduated from the Albia High School with the Class of 1953. On July 3, 1952, Alice was united in marriage to Dwight Shaw in Corydon, IA, and to this union, 6 children Debera, Terry, Cindy, Karla, Vicki, and Becca, were born. Alice and Dwight shared 41 years of marriage prior to his passing on December 20, 1993. Alice later married Paul Davis on May 1, 1999, at St. Mary’s Catholic Church in Albia. Paul preceded her in death on January 1, 2017. Alice worked as a Nurse’s Aide at the Monroe County Hospital before going to work at Chicago Rivet from 1977 until her retirement in 1999. She was a member of St. Mary’s Catholic Church in Albia. Alice enjoyed quilting, reading, and crafting. She loved to travel. Above all else, Alice enjoyed spending time with her family and friends. Alice is survived by her children, Debera (Mike) Richmond of Ankeny, Terry (Joyce) Shaw of Albia, Cindy (Bill) Beary of Albia, Karla Clements of Albia, Vicki (Mike) Watkins of Muscatine, and Becca (Tom) Shoppa of Muscatine; 13 grandchildren; 23 great grandchildren; siblings, Patricia Datin of Albia, Marilyn Fulton of Iowa City, Janet Summers of Albia and Michael (Donna) Zotz of Afton. Alice is also survived by several nieces and nephews, cousins and good friends. She was preceded in death by her husbands, Dwight Shaw and Paul Davis; her parents, Carl and Armenta Zotz; a sister, Mary Zotz; a brother, Carl Zotz; a granddaughter, Michele; and a grandson, Scott. Visitation will be held from 11:30 a.m.-1:30 p.m., Saturday, February 13, 2021, at the Tharp Funeral Home in Albia, with Alice’s family present to greet family and friends. A Mass of Christian Burial will be held at 2:00 p.m., Saturday, February 13, 2021, at St. Mary’s Catholic Church in Albia, with Father Mark Yates, C.PP.S. officiating. Burial will follow services at St. Mary’s Cemetery in Albia. Due to the enhanced public health measures for the state of Iowa, masks will be mandatory for those in attendance over the age of 2. The service will be livestreamed on the Tharp Funeral Home Facebook page. In lieu of flowers, a memorial has been established to the American Heart Association.

Alice Shaw Davis, age 85, of Albia, passed away on Thursday, February 11, 2021, at her home in Albia, IA. Alice was born on July 15, 1935, to Carl and Armenta (Owens) Zotz in Rock Island, IL. She graduated from the Albia High School with... View Obituary & Service Information

The family of Alice Shaw Davis created this Life Tributes page to make it easy to share your memories.