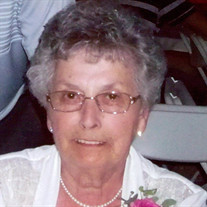 Alice “Coleen” Lenger , age 77, of Albia, passed away on January 8, 2017 at her home under the care of HCI Hospice. Coleen was born on September 12, 1939 to Orland and Alice (Howard) Sterner in Mahaska County. She grew up and attended Bussey High School, graduating with the Class of 1957. On June 20, 1959 she was united in marriage to Dan Lenger at St. Peter’s Church in Lovilia, Iowa. To this union six children were born, Timmy, Denise, Ann, Mary, Danny, and Jim. Coleen and Dan shared 52 years of marriage together until Dan’s passing in 2011. Coleen worked as a farmwife her entire life. She was also employed at the Mahaska Bottling Company in Oskaloosa before retiring after 28 years. She was a member of the St. Peter’s Church and Altar and Rosary Society in Lovilia. Coleen considered the church ladies as her very close friends and always enjoyed working and preparing church meals with them. She enjoyed her flower and vegetable garden, baking, cooking, crocheting, sewing and traveling with her husband Dan. She always put family first and her real joy in life was spending time with her friends and family, especially her grandchildren and great grandchildren. Coleen is survived by her children, Denise Fisher of Lovilia, Ann McCloud of Albia, Mary (Pat) Wynn of Albia, Danny Lenger of Newton IA and Jim Lenger of Anamosa, IA; eleven grandchildren and fifteen great grandchildren; a sister, Karen (Wes) King; a brother, John (Rhonda) Sterner and her beloved dog, “Puppy”. She is preceded in death by her parents, Orland and Alice; her husband, Dan; a son in infancy, Timmy and a sister, Linda. A Mass of Christian Burial will be held at 10:30 a.m., Thursday, January 12, 2017 at St. Mary’s Catholic Church in Albia, with Father Mark Yates C.PP.S. and Father Michael Volkmer C.PP.S. officiating. Burial will follow services at St. Mary’s Catholic Cemetery in Albia. Visitation will be held from 11:00 a.m.-8:00 p.m. Wednesday, January 11, 2017 at the Tharp Funeral Home in Albia, with Coleen's family present from 3 to 8 p.m. A 4:00 p.m. rosary will be led by St. Mary’s Altar and Rosary Society. Memorials have been established to HCI Hospice, St. Mary’s Cemetery or St. Peter’s Altar and Rosary Society.

The family of Alice "Coleen" Lenger created this Life Tributes page to make it easy to share your memories.

Send flowers to the Lenger family.