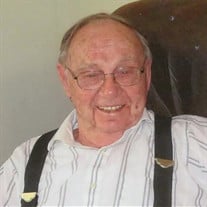 Alfred “Lester” Poole age 94, of Albia, passed away on Tuesday, October 18, 2016, under the care of HCI Hospice, at the Monroe Care Center in Albia. Lester was born May 21, 1922, to Byron Fredrick and Grace (DeRosear) Poole in Lee County, Iowa. He graduated from Revere High School in Missouri and attended Iowa Wesleyan College in Mt. Pleasant and later graduated from The Graduate School of Banking in Madison Wisconsin. Lester served his country during World War II in the United States Navy. On February 6, 1943 he married Lois Maxine Gares in Kahoka, Missouri. To this union two children were born, Patty and Stephen. Lester worked at Goode Seed and Feed in Albia in his younger years, before entering banking, where he worked at Peoples National Bank in Albia for 35 years retiring as Executive Vice President. Lester was a member of the First United Methodist Church, where he was proud to be the chairman for the church building committee that helped break ground to form the current Trinity United Methodist Church. He was also a member of the Albia School Board, Indian Hills Community College Board of Directors, the American Legion, Howard Cessna post #137, Rotary Club, Astor Lodge #505 and was an active member of the Shriners. He enjoyed reading, being outdoors, hunting, fishing and golfing. His real love in life was spending time with family and friends. Lester is survived by his wife of 73 years, Lois Poole of Albia; his two children, Patty (John) Judge of Albia and Stephen Poole (Denise StClair) of Des Moines; five grandchildren, Douglas (Heather) Judge, Dien (Steva) Judge, Joseph (Betsy) Judge, Sean Poole and Spencer Poole; four great grandchildren, Catrina, Anne, Aidan and Millie. Lester is also survived by a brother, Allen (Ruth) Poole and a sister Margaret Thompson, and many nieces and nephews. He was preceded in death by his parents, Byron and Grace. Funeral Services will be held at 10:30 a.m., Friday, October 21, 2016, at Trinity United Methodist Church in Albia, with Pastor Roger Henry officiating. Burial with military rites provided by the American Legion of Albia, Melrose and Lovilia will follow services at Oak View Cemetery in Albia. Visitation will be held from 1:00 p.m. to 8:00 p.m. Thursday, October 20, 2016, at Tharp Funeral Home in Albia, with Lester’s family present from 5:00 to 8:00 p.m. Masonic Rites provided by Astor Lodge #505 will be held at 7:00 p.m. Memorials have been established to Welcome Home Soldier Memorial or to the Albia Public Library.

The family of Alfred "Lester" Poole created this Life Tributes page to make it easy to share your memories.

Send flowers to the Poole family.