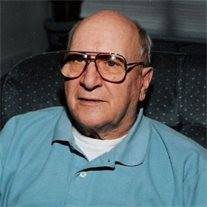 Alfred Dean Mosley, age 80, of Albia, Iowa died Monday, December 11, 2006 at the Oakwood Nursing & Rehabilitation Center in Albia. He was born March 16, 1926 in Fredrick, Iowa to Joseph and Lois Lenore (Wignall) Mosley. He married Barbara Jean Gretten on February 10, 1956 in Avery, Iowa. She passed away May 8, 1981. Alfred was a graduate from Bendle High School, Class of 1943 in Flint, Michigan. He was a veteran of World War II having served in the U. S. Navy. Alfred worked for Maytag in Newton, Iowa as an Inspector retiring in 1988 after 22 years. He was a member of the Albia Eagles AERIE No. 3583, having served as a past president and treasurer, a member of the Howard Cessna Post No. 136 American Legion in Albia and a 56-year member of the Astor Masonic Lodge No. 505 in Albia. Alfred loved to hunt and fish in his younger years and he truly loved working on the farm. In his later years he loved to dance. He is survived by one daughter, Kim (Tom) Jamieson of Albia; two granddaughters, Savannah Jean and Kaylynn Mae Jamieson; two step-grandchildren, Tommy (Mary) Jamieson and Misty (Jerry) Van Dorin; and 5 step-great grandchildren. Alfred is also survived by two sisters, Joetta (John) Stanley of New York and Deb (Mike) Shehan of Albia; along with many nieces and nephews. Alfred was preceded in death by his parents; his wife; and one son, Lance Dean Mosley. Funeral services will be held at 10:00 A.M. Thursday, December 14, 2006 at the Winfield Funeral Home in Albia with Rev. Kevin Leveck officiating. Burial with military rites conducted by the Howard Cessna Post No. 136 American Legion of Albia will be held in the Hiteman Cemetery in Hiteman. Visitation will open after 12 (noon) on Wednesday, December 13, 2006 at the Winfield Funeral Home in Albia with the family present from 6-8 P.M. A Masonic service conducted by the Astor Lodge No. 505 of Albia will be held at 6:30 P.M. Wednesday evening at the funeral home. A memorial has been established to the Alzheimer’s Association.

The family of Alfred Dean Mosley created this Life Tributes page to make it easy to share your memories.

Send flowers to the Mosley family.