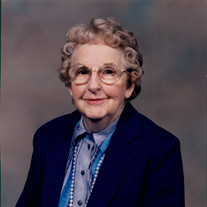 Alberta Bessie Mae Stewart, Age 100, of Albia, passed away Friday, October 6, 2017 at the Oakwood Specialty Care Facility in Albia, Iowa. Alberta was born on the family farm in Rural Monroe County on April 9, 1917 to Charles and Bessie (Byerley) Stewart. She attended school at Egypt, a one room school house in Bluff Creek Township. She stayed with her father on the farm, after her mother passed away in 1948. She would help with milking the cows, selling eggs, cream, and greeting cards. She moved into town in 1963 and began working in the Albia Hotel. She also helped as a cook at Ragtime Industries until she retired in 1989. After retirement she remained active in the community. She loved to plant a large garden and would always sell tomatoes to different businesses in Albia. She enjoyed going to auctions, attending yard sales, visiting people at nursing homes and was known for her homemade cookies. Alberta loved all of her nieces and nephews and considered all 16 of them her own children. Alberta is survived by ten nieces and nephews; Wanda Steinbach, Linda Lospalutto, Jean Weber, Karen Casper, Margaret Van Langen, Stephen Stewart, Claudia Farrell, Debby Conner, David Stewart and Bess Powers and a nieces-in-law, Dotty Stewart and Carol Stewart; and nephew-in-law, Darrell Lanz. She is also survived by many other great, great-great and great-great-great nieces and nephews. She is preceded in death by her parents, Charles and Bessie Stewart; 7 siblings and 6 nieces and nephews, Harold Tucker, Mary Claire Lanz, Larry Stewart, Dennis Blomgren, Dorothy Fuell and Charles Stewart. Funeral services will be held at 11:00 a.m., Thursday, October 12, 2017, at Trinity United Methodist Church in Albia, with Pastor Roger Henry officiating. Burial will be at Woodlawn Cemetery in Lovilia following the service and luncheon at the church. Visitation will begin at 1:00 p.m. until 8:00 p.m., Wednesday, October 11, 2017, at Tharp Funeral Home in Albia with Alberta’s family present from 6:00 p.m.-8:00 p.m. to greet family and friends. Memorials may be made to the Trinity United Methodist Church in Albia.

The family of Alberta Bessie Mae Stewart created this Life Tributes page to make it easy to share your memories.