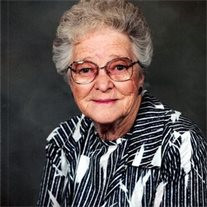 Alberta Denato, age 85, of Albia, Iowa died Friday, January 26, 2007 at the Monroe County Hospital Extended Care Unit in Albia. She was born September 15, 1921 in Tiperary Coal Camp in Monroe County, Iowa west of Hiteman to Elsworth and Nellie Ruth (Auxier) Kline, Sr. She married Silvio Denato, Sr. on January 2, 1940 in Sedalia, Missouri. He passed away on May 3, 1988. Alberta was a graduate of Albia High School, class of 1940. Her and her husband Silvio moved to Joliet, Illinois in 1952 where she had worked 15 years for F.W. Sickles as a supervisor and later for Caterpillar for 12 years. She was also a homemaker. They returned to Albia in 1977. She was a member of the American Legion Auxiliary in Albia. Alberta enjoyed playing bingo, watching wildlife in her yard and having coffee with her Hardees' friends. She loved animals and enjoyed her neighbors as she looked after them and they looked after her. She is survived by one daughter, Alberta Cady and husband Garon of Eddyville, Iowa and one son, William Denato and wife Mary of Riverbank, California; 6 grandchildren and 9 great grandchildren. Also surviving is one brother Gene Kline of Melrose. She was preceded in death by her parents; her husband; one son, Silvio Denato, Jr.; one grandson, Bob Denato; one sister, Barbara Chidester and one brother, Elsworth Kline, Jr. Funeral services will be held 10:30 A.M. Tuesday, January 30, 2007 at the Winfield Funeral Home in Albia with Rev. Kevin Leveck officiating. Burial will follow the service at Oak View Cemetery in Albia. Visitation will open after 9:00 A.M. Tuesday morning and run until the time of the service with the family present. Casketbearers will be members of the Howard Cessna Post No. 136 American Legion of Albia. Memorials have been established to the Leisure Lounge Senior Citizen Center in Albia.

The family of Alberta Alice Denato created this Life Tributes page to make it easy to share your memories.

Send flowers to the Denato family.