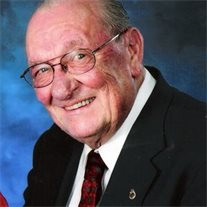 Albert E. Yarkosky, age 85, of Albia, died late Friday evening July 18, 2008 at the Monroe County Hospital in Albia, Iowa. Albert was born on August 9, 1922, at home in Hiteman to George and Susie (Adams) Yarkosky. Al attended and graduated from Albia High School. During his school years he worked for the Supply Store, (Hy-Vee), as a delivery boy. After school Al joined the U.S. Air Force. He served from 1943 to 1946, during WWII, as an airplane mechanic. In 1946, after his service to his country, Al came back to Albia, and began working again for Hy-Vee Food Stores. Al worked for Hy-Vee for 45 years, from 1941 to 1985, before retiring as an assistant store director. After his retirement, he started Al's Small Engine Repair out of his garage. Al worked on small engines for almost 20 years. Albert married Mary Bernadine Yochum on October 13, 1947 at St. Patrick's Catholic Church in Melrose. Albert and Mary kept a lovely home and were devoted to raising their seven children. Albert and Mary were united in marriage for 60 years, before Mary died suddenly in April of 2008. Albert was a hard worker. He enjoyed fishing and raising a big garden for his family and friends; he attended and supported the Albia sporting events, and was an avid Chicago Cubs fan. Al was also a member of St. Mary's Catholic Church, a 3rd degree member of the Knights of Columbus, Council 4167 of Albia, and a 60 year member of the American Legion, Howard Cessna Post #136, and the V. F. W., all of Albia. Albert enjoyed visiting with friends at the local coffee spots; The Fountain, Hardees, and the American Legion. Albert is survived by his children, Linda Kurth (Paul) of Ottumwa, Nancy Yarkosky of Minneapolis, MN, Steve Yarkosky (Chris) of Tavares, Florida, Patricia Yarkosky of Albia, Karen Rubino (Jim) of De Soto, KS, and Julie Baker (Dale) of McLean, VA; 13 grandchildren; 6 greatgrandchildren. Albert is also survived by two brothers George Yarkosky, Jr. of Albia, Francis Yarkosky of Kansas City, Mo; and two sisters, Sister Karen Yarkosky, and Helen Steinbach, both of Des Moines. Al was preceded in death by his parents; his wife Mary; one son, Richard "Dick" Yarkosky; and three brothers Joseph, Donald, and John Yarkosky.

The family of Albert Edward Yarkosky created this Life Tributes page to make it easy to share your memories.

Send flowers to the Yarkosky family.