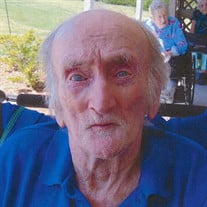 Albert R. Sample, age 88, of Centerville, formerly of Albia, passed away on Sunday, August 25, 2019, at Golden Age Care Center in Centerville, Iowa. Albert was born on October 16, 1930, at home in Davis County to Roy and Clara (Orman) Sample. He grew up and attended school in Albia, graduating from the Albia High School with the Class of 1948. He later attended trade school for 6 months to become a barber. Albert served his country in the United States Army stationed in Germany as a cook during the Korean War. Albert was a jack of all trades and worked many jobs during his lifetime. He worked at Downs Funeral Home in Albia for many years before joining the circus. While with the circus, he had Samson the Wresting Bear who wrestled different all-star wrestlers such as Harley Race. He traveled all over with the circus, also assisting with the rides. He later scrapped metal, as well as running a gas station and a restaurant. Albert enjoyed being outdoors and loved to hunt, fish, and trap. He was a very talented musician who could play anything. His love of music allowed him to meet celebrities including Shep Woolley and Loretta Lynn. Albert was very social, loved a good cup of coffee, and never knew a stranger. Albert is survived by a sister, Opal (Kenny) Huber; a daugther, Linda; a stepson, Donny; and a stepdaughter, Betty. He is also survived by many nieces, nephews, cousins, and good friends. He was preceded in death by his parents, Roy and Clara; 4 brothers, Wayne and Glen Sample and 2 in infancy; a sister, Mary Prose; and a stepson, Johnny. Visitation will be held from 9:30 a.m.-10:30 a.m. on Friday, August 30, 2019, at the Tharp Funeral Home in Albia with Albert’s family present to greet family and friends. Funeral services will be held on Friday, August 30, 2019 at 10:30 a.m. at the Tharp Funeral Home in Albia, with Pastor Lynda Carlson officiating. Burial with military rites provided by the American Legion of Albia, Melrose and Lovilia will follow services at Selection Cemetery in Monroe County. An open memorial has been established to the family.

The family of Albert R. Sample created this Life Tributes page to make it easy to share your memories.

Send flowers to the Sample family.