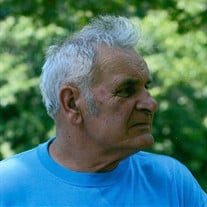 Albert Irwin Hackett, age 80, of Albia, passed away Sunday, October 8, 2017 surrounded by his family at his home in Albia under the care of Care Initiatives Hospice. Albert was born on April 10, 1937 to Russell and Edith (Gardner) Hackett in Albia. He grew up and attended Albia High School and graduated with the Class of 1955. On January 10, 1959 he was united in marriage to Eleanor Chapman at the Unionville Church in Missouri. To this union, four children were born, Linda, Ricky, Albert E and Andrew. Albert and Eleanor enjoyed 58 years of marriage together. Albert was employed as a dock worker for Maloney Door Factory until the family moved to Denver where he worked for Red Ball Motor Freight. He was an over-the-road truck driver for 40 years. In 1980 Albert and Eleanor returned to Iowa where they remained for 37 years. He took a job driving for Kroblin Trucking and ended his driving career with Fenton Trucking in Centerville, Iowa. After moving to Albia, Albert worked for O’Hara Hardware until retiring. Albert was a member of the Cornerstone Community Church in Albia, where he enjoyed the music, children and fellowship with good friends. He is survived by his wife, Eleanor of Albia; his children, Linda of Phoenix, AZ; Albert E. of Happy Camp, CA; and Andrew of Numa, IA; a brother, Jim (Judy) Hackett of Albia; three sisters, Mary Peterson of Centerville, Joan (Ellis) Williams of Lovilia, and Linda Kay of Knoxville; 8 grandchildren; 7 great-grandchildren; and a daughter-in-law, Kandi Hackett of Corydon. Albert is also survived by nieces, nephews, cousins and good friends. Albert is preceded in death by his parents, Russell and Edith; a son, Ricky Hackett and two sisters, Mabel Collett and Ava Russell and two brothers-in-law Jack Peterson and Frank Collett. Funeral services will be held at 10:30 a.m., Thursday, October 12, 2017, at the Cornerstone Community Church in Albia with Pastor Mark Brandt officiating. Albert’s body will be cremated following services per his wishes and private family burial will be held at a later date. Visitation will begin at 4:00 p.m. until 8:00 p.m. on Wednesday, October 11, 2017, at the Cornerstone Community Church in Albia, with Albert’s family present from 6:00 p.m. until 8:00 p.m.to greet family and friends. An open memorial has been established in Albert’s name.

Albert Irwin Hackett, age 80, of Albia, passed away Sunday, October 8, 2017 surrounded by his family at his home in Albia under the care of Care Initiatives Hospice. Albert was born on April 10, 1937 to Russell and Edith (Gardner) Hackett... View Obituary & Service Information

The family of Albert Irwin Hackett created this Life Tributes page to make it easy to share your memories.

Send flowers to the Hackett family.